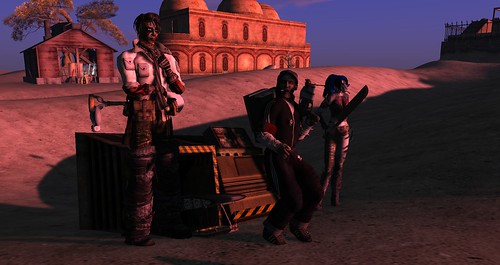 Fighters were pitted against each other via the point system this week and matches were as follows:

Remarks: Out of the gates, Zack attacked VoidTraveller swiftly, inadvertently getting poisoned several times as the fighters clashed along the perimeter of the arena. Attempting to maximize the potential for healing gas, he continued to test the gas traps with varied results, eventually falling due to accumulated poison and weapons damage.

Remarks: Dassina targeted Briggz early on, prompting the newcomer to run directly across the arena in to various gas and spike traps.  He learned quickly that doing so was not wise and expired shortly afterward.

Remarks: In a game where craftiness, skill and awareness of the arena are key, one who fights with a deliberate disadvantage in weaponry must rely at least in some part upon the complexity of the arena to deal a wild-card or two to their opponent. Unfortunately the minimalist Blunt arena map, with its few mine and spike traps spaced in the middle of each quadrant, did little to provide obstacle to Zeroyel’s opponent. While neither fighter ran in to any traps during this match, Zeroyel’s dependence on fistwraps against Syruss’ flayer on this map spelled out a sure loss for the long-time fighter.

Remarks: Despite his first loss earlier in the round, Zack again set out to quickly take down Briggz. Both fighters did however find the plethora of pit traps to be a major obstacle, as they made for unexpected disappearances and reappearances. Briggz’ seemed able to jump unnaturally high and used it frequently to avoid his opponent while running back at him with a flayer, however this hit and run strategy did not prove to be useful as Zack was able to take him down with a crowbill and a bit of patience.

Remarks: Dassina was poisoned twice early on during her first rush at Zeroyel, across the arena. The two exchanged fisticuffs all over the arena, though Dassina with notably more power from her use of facecrushers. Even so, the fighters were able to keep the match extremely high paced yet survive for a considerable amount of time. Zeroyel was additionally exceptionally lucky in his attempts at Hooper Gambits, receiving no fewer than 3 bursts of healing gas in his attempt to win a point for this round of the match. His luck finally ran out as Dassina finally took him down with a final punch, bringing this exceedingly long and epic match to an end.

Remarks: Syruss and VoidTraveller faced off at close quarters, successfully avoiding mines for some time. Voidtraveller took advantage of Syruss’ lack of action near the end of the match to switch to a nailgun. Enabling him to deal damage from a distance, VoidTraveller successfully used it to distract his opponent in to walking on a mine and was able to finish him off with it rather quickly.

Remarks: The competitors kept things tight, avoiding any peripheral traps, choosing instead to fight in areas, such as the center or near cell doors, where traps were less of a danger. Zach was able to pin Syruss to a cell door for much of the match and was thus able to advance to the final round.

Remarks: Zack and Dassina both leapt out of the gate immediately, while Voiddtraveller bided his time near his own cell door.  His avoidance of combat was interrupted as Zack dropped in on his hiding spot, causing Voidtraveller to run in to a spike trap, then a poison trap. The competitors exchanged blows fairly equally after that point, Zack receiving multiple doses of poison as he attacked both Dassina and Voidtraveller. His attempts to use the gas traps to heal appeared to be successful for some time, but ultimately Zack found this was a losing battle, as he fought to maintain some measure of health at all while the other fighters continued to exchanged blows without him. Nearer the end, Voidtraveller took a page from Zack’s book and also attempted the use of gas traps to maintain his health, however he too found the accumulated poison damage too much to take and fell, leaving Dassina the victor.