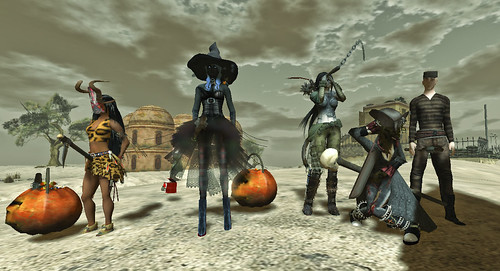 Residents of the Wastelands woke this day to a strange festival held every year about this time for as long as anyone can remember; the origins of which are no longer entirely clear. While some say that the artifacts found and passed about – immense carved gourd-like squash fruit and various sweets scavenged from supplies long thought expired – are parts of rites intended to stave off the approach of ghouls, certainly it is clear these rites failed as it is not uncommon to come across such ghouls on a regular basis in our lands.

Nevertheless, Wastelanders converged on this special day not only to celebrate in the spirit of these rites but to take part in the War Zone tournament, which had fallen in to disuse many months ago only to reappear again last month on a trial basis.  Starved for some form of combat outside of the Potato Farm, quite a number of folk appeared not only to watch but fight as well.

Dassina grabbed the flag first, followed by Cat, Aposiopesis, Tokiko, Sandusky, and KittyKat. Heading north, Dassina stopped by the North Garisson, mounting the upper levels with ease but losing the flag to Aposiopesis, who headed directly south. She circled a few of the newer buildings, then west and up over the great hill. Dassina picked up the flag for a short while, only to have it stolen by Tokiko, running in the opposite direction, around the Garisson, then towards the north-west, then south along the western border of Hambone Slash.

TheBlackCloud stole the flag for a short time, but the flag was passed around quite a number of times almost immediately afterward, first by Aposiopesis, then Sandusky, back to Aposiopesis, then Tokiko and finally Cigi, who took the flag eastward, then south and around the arena, on an extended chase north and south until she fell from radiation poisoning and Tokiko took up the flagsome two and a half minutes later near the southern garrison. Tokiko was taken down a minute or so later by Psycho’s rifle, allowing the Dassina to snatch it up and head westward, across the northern end of Hambone Slash, closely followed by Cat, Sandusky and Aposiopesis. She managed to circle back south again towards the Southern Garrison, but expired from radiation poisoning just outside the building’s fence.

Aposiopesis picked up the flag but immediately lost it to Cat, who stole it and fled north closer to the abandoned pipeline. Losing the flag there to Cigi, she managed to steal it back briefly, only to lose it to TheBlackCloud, who circled north around the quarry with it, where the timer ran out and the round came to a close.

Team 2 was found to have held the flag the longest during this round.

Aposiopesis grabbed the flag first but almost immediately lost it as opponent TheBlackCloud stole it away for an instant. The flag passed to Sandusky, who emerged from the northern cell exiting the Potato Farm – only to realize that TheBlackCloud had stolen it back. Experiencing a little trouble exiting the arena from the same cell, TheBlackCloud again lost it to Sandusky, who grabbed it just as she emerged. Making a mad dash west pursued by fighters from both teams for about half a minute. TheBlackCloud managed to catch up and snatch the flag away, heading west to the southern end of the quarry, intending to head north, when Aposiopesis grabbed the flag, leaping about the quarry cliffs for a few seconds until TheBlackCloud again grabbed the flag, taking it north, up to the Great Hill. Aposiopesis overtook her there and grabbed the flag, fleeing up to the Northern Garrison in an attempt to shake free her pursuers, all closely following with a fair mix of projectile and melee weapons.

As she left the fortified compound, circling about just south of it, Cigi Sahara managed to pick up the flag and head east, then southward closer to the arena, with Sandusky, Dassina and Aposiopesis strung out loosely behind. The chase took Cigi around past the Southern Garrisson and back out west to the quarry again until Sandusky managed to take it from her and tried to use the encampment there to shake off his pursuers. There, TheBlackCloud was able to take up the flag again for about a minute, untill Dassina took it and bounded north and east, across the quary, and in to the various new buildings in the area. She remained elusive for quite some time, heading southward and around the arena, managing to escape westward toward the pipeline, expiring only after some excellent rifle-fire from Cat Yahura.

Sandusky grabbed the flag soon afterward, passing the flag to Aposiopesis, who headed southwest along the rim of the quarry, then back east toward the arena, with Cigi and Sandusky trailing behind.  TheBlackCloud caught up with Aposiopesis nearer the arena and fled west, skirting the southern border of Hambone slash, then up northward trailed only by Sandusky and a far distant Cigi. Perhaps realizing her nearest teammate was far behind, TheBlackCloud turned back and tried passing the flag to Cigi, but the opportunity was stolen by Sandusky, who by this time had caught up with her.  Taking the opportunity to steal the flag, Sandusky deked around Cigi quickly while TheBlackCloud abruptly expired from radiation poisoning behind them both. Sandusky’s route took him south, around a handful of structures along the southern border of the region, then headed back north toward the nearby quarry edge, however the flag went out of play as the round came to a close.

Once again, Team 2 was found to have held the flag for the longest period during this match, cementing the necessary two games out of possible three for winning the game. They walked away with large (and special!) collections of Halloween goodies for their efforts.

(( Editor’s note: Warzone is held every last weekend of the month at Hambone Slash, starting at 3PM SLT at the Potato Farm! – AS))