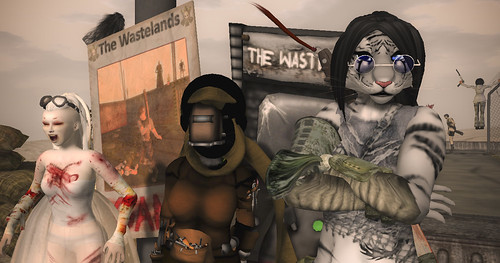 This week, fighters tested out the newly installed map maker, thanks to Neobokrug Elytis. Fighters and audience members alike were invited to submit new maps as new challenges for each match.

Fighters were pitted against each other via traditional tournament system this week and matches were as follows:

Remarks: A lengthy fight. the fighters kept mostly to the northern portion of the arena, intermittently chasing each other to the southwest quadrant (and receiving some poison damage, on Ironblood’s part), but for the most part taking advantage of the clear tiles near the north gate.   Nearer the end, Ironblood was grazed by a saw and strayed in to a mine in the north-western corner of the map, taking him out of the match.

Remarks: Due to technical difficulties, remarks for this match are not available.

Remarks: The match got off to a slow start as Cigi and Tokiko were hesitant to bridge the divide between the east and west halves of the map. Cigi pulled a rifle for a short time in an attempt to wreak some havok on her opponent without receiving damage herself. After Tokiko crossed the divide by running through the gas traps along the north end of the map, Cigi switched to a crowbill and the two chased each other to the east, then the west, ending up in the north-west corner to exchange blows. Nearer the end of the match, Tokiko began running the gas traps again in an attempt to buffer her health, but received more poison damage than health.  The fighting continued running north and south along the west wall until accumulated poison damage finally took Tokiko down about five minutes in to the match.

Remarks: TheBlackCloud and KittyKat met along the northern edge of the map, avoiding the numerous gas and mine traps closer to the middle.  They circled for some time in the north-west corner, Kittykat breadking things up by attempting a Hooper Gambit on a nearby gas trap, successfully receiving a dose of healing gas. The fighting continued  along the northern edge of the map for a minute or so, but KittyKat eventually fell under TheBlackCloud’s crowbill.

Remarks: Cat ran in to a triplet of spike traps in quick succession while first attempting to attack Ironblood quickly, then as she ran to avoid strikes from his crowbill. This took her out of the match in under half a minute.

Remarks: Tokiko and Kittykat met up in the north-west corner, fighting in tight form with KittyKat intermittently attempting Hooper Gambits, which did get her some healing, but also at least a couple doses of poison. Soon afterward, the fight began moving around the entire perimeter of the arena, with KittyKat making liberal use of the gas traps in the area. Finally, after a very long seven minutes, KittyKat’s luck ran out with the gas traps and she lost the match as a result of accumulated poison and damage from Tokiko’s Kidney Burster.

Remarks: Tigerpaw and mechanique clashed along the west wall, each drawing significant amounts of blood with their blows. Tokiko was, however, able to make short work of her opponent having brought her kidney burster up against his crowbill.

Remarks: Cautious steps characterized the start of this match as the map was again divided by a significant number of traps. Cigi made the first move, attempting a jump across along the north side, but getting dosed with poison gass in the process. The two fighters clashed for some time in the north-west corner, taking advantage of a relatively trap-free space to fight on. Cigi mixed things up a bit running in to a couple of nearby gas traps, becoming poisoned in the process and allowing TheBlackCloud to jump across to the north-east corner for a short while. The two chased each-other back and forth between each corner , but ended up once again in the north-west one, where Cigi eventually fell as the result of running in to a nearby spike and saw trap.

Remarks: Aposiopesis was poisoned by a gas trap early in the match. Poisoned again after a clash with her opponent and a subsequent Hooper Gambit, she tried pushing Dassina in to the south-east corner of the arena, but walked in to two spike traps in the process, which took her out in short order.

Remarks: Straight out of the gates, TheBlackCloud was poisoned by the gas trap just outside her gate. Dassina made a running leap to avoid hers, while Tokiko chose to stay still and attack her enemies from afar with a nail-gun. When both TheBlackCloud and Dassina approached her with some speed, Tokiko made the switch to a kidney burster. Cloudy met with Tokiko first, but was drawn away almost as quickly when Dassina attacked from behind. She attempted to flee, moving closer to the middle of the map and running back and forth east and west. Nearer the half-way point of the match, she ran in to more poison traps as well as a saw, falling down as she reached the center of the map once again.  Dassina and Tokiko then continued to fight in the middle of the map, with Dassina repeatedly attempting (and sometimes succeeding in) Hooper Gambits. As the result of fighting around the gas trap center tile, both fighters received additional poison gas. Without the benefit of any healing gas, Tokiko fell first, allowing Dassina to claim first prize.