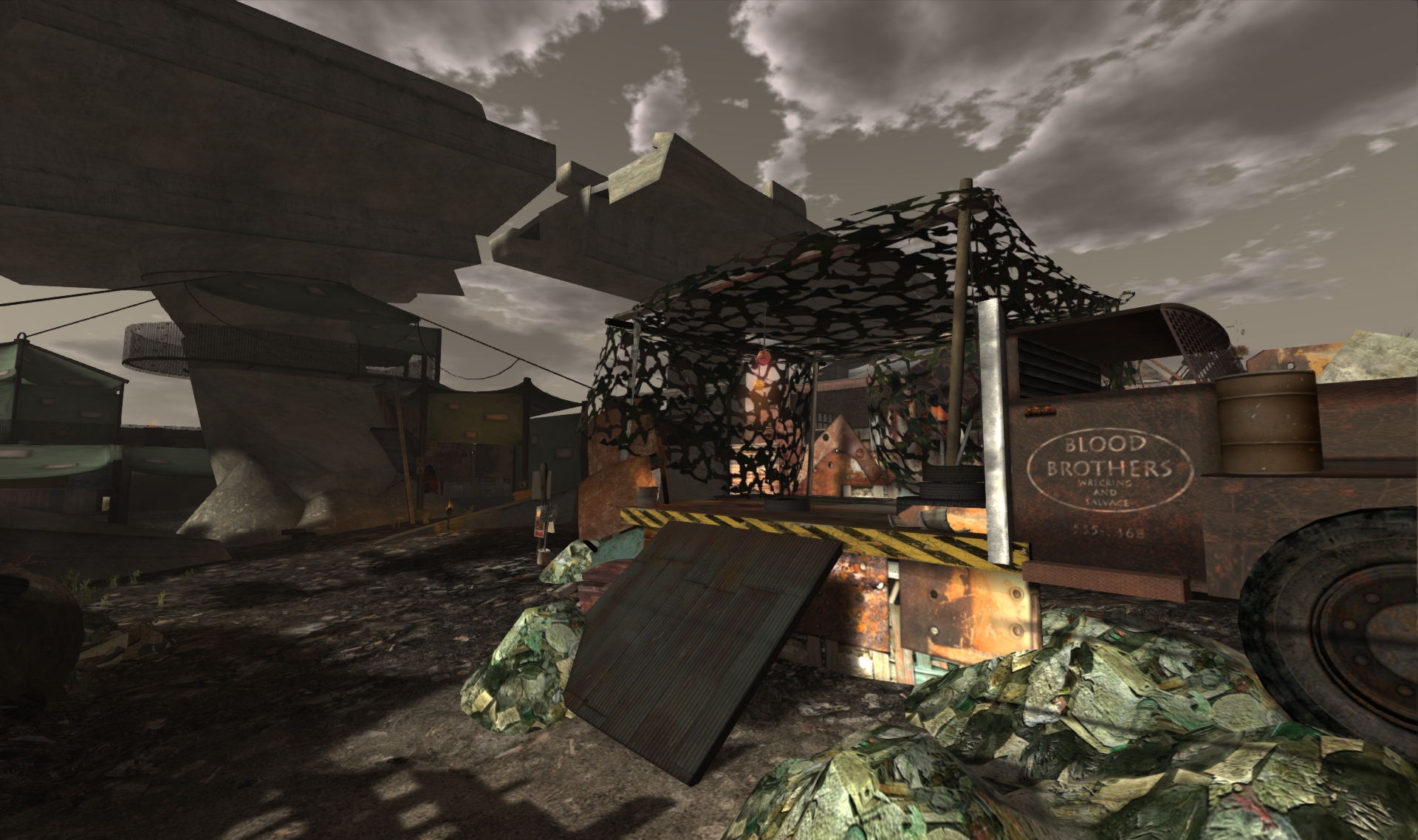 As part of the Gathering of Tribes event held during this weekend, this week’s fights were rather unconventional, hosted by the Wastelands’ very own mutant witch, CCindy Pfeffer.

Six teams were pitted against each other equally, then a final match featuring all of the teams was held.  Matches were as follows:

Remarks: Smokey, Dassina and KittyCat clashed early on, meeting near the north-eastern quadrant of the map. Tokiko, having taken the southern route upon exist from her team’s western cell, caught up a short time later and found herself coming up against Smokey, while KittyKat and Dassina exchanged blows for a while. Fighting moved intermittently between the north (Cell A) and east (Cell B) cell doors, with KittyKat falling first, then Smokey shortly afterward, allowing Tokiko and Dassina to move to the next round.

Remarks: Out of the gates, TheBlackCloud, Ell and Zeroyel came together, deftly avoiding the various mines positioned directly outside of each cell and partaking in hand to hand combat in the relatively clear ‘ring’ area. Psycho provided cover fire for Ell, but as the fight continued he moved to follow them and switched his rifle for a vicious clobbering stick.  The arena did not take its toll until Ell strayed in to a mine while avoiding Zeroyel’s running approach with a crowbill. She hit several mines shortly afterward, along with a couple of saw traps, which caused her to drop out of action first.  TheBlackcloud also received some saw damage while avoiding Psycho, and in a gamble for healing gas, Zeroyel received poison instead.  Nevertheless, both were able to pin down Psycho in the north-east corner until he expired from his injuries.

Remarks: Both teams took advantage of the relatively clear space in the northern corners, Aposiopesis rounding on Kittykat and Smokey fighting Nino.  While Smokey and Nino moved all over the map, KittyKat and Aposiopesis stuck fairly close to the eastern cell (Cell B).  Fighters began attempting the Hooper Gambit early on, with KittyKat mostly being poisoned and both Nino and Aposiopesis receiving healing gas instead.  Smokey ran in to a mine along the southern end while clashing with Nino in the center of the map, ultimately driving Nino to flee directly in to a mine and smokey right behind him on another.  This action took Nino out of play, leaving Smokey to attempt multiple Hooper Gambits (all failing) while attempting to bring down his remaining opponent, Aposiopesis. With extra pressure pushing the fight away from the north-eastern corner, all three moved west to try and take advantage of the gas traps, with only KittyKat succeeding in her Hooper Gambit.  Nonetheless, both KittyKat and Aposiopesis fell from their accumulated injuries before Smokey could, allowing KittyKat and Smokey to move on with a point in their favour.

Remarks: Out of the gates, Both Tokiko and Dassina went directly after Psycho, leaving Ell relatively unscathed. It wasn’t until about a quarter of the match had passed that Ell joined in, pursuing Tokiko with her flayer. The first tripped mine occured closer to the half-way point of the match, set off by Psycho while being pursued by both of his opponents. While chasing Tokiko, Ell ran in to five mines and was the first to be taken out of action. Psycho continued to take advantage of the mostly clear arena by moving about quickly, however the two to one player advantage quickly made itself apparent, as his opponents ganged up on him and took him out in short order.

Remarks: Due to technical difficulties, full details are not available for this match.

Remarks: Many of the fighters converged in the north-eastern corner early on, attempting to move away from the spiked ring bordering the arena but many not succeeding without significant damage from the vicous spike traps. KittyKat was the first to get spiked along the eastern wall while chasing Aposiopesis, with Zeroyel next being pursued by Ell. Standing well aside of the melange going on inside of the ring of spikes, Smokey attempted a Hooper maneuver in the south-eastern corner and failed, becoming poisoned in the process.

Ell met with a spike trap about a quarter of the match in while fleeing from Dassina, with Zeroyel and KittyKat clashing nearby. Running in to two more spikes while attempting to slice through the competition, she found herself a bit short after passing through her opponents one last time. Meanwehile, KittyKat crumbled under pressure from both Aposiopesis and Zeroyel, backing in to a spike not far from Ell’s last run-in with another.

Psycho was the next to fall (from accumulated injuries), followed by Zeroyel, who received a double dose of poison gas from twin attempts at the Hooper Gambit.  After repeated tangles with Tokiko and Smokey, Aposiopesis expired not far from the middle of the map. Smokey expired after an extended corner tussle with Nino and TheBlackCloud.  Coming away from that fight with both damage from spikes and poison gas, TheBlackCloud was taken out of action next, finally taken out by Tokiko after a bit of a chase. Nino fell from injuries acquired during his fight in the corner with TheBlackCloud and Smokey, leaving Tokiko & Dassina the winners of the final match.