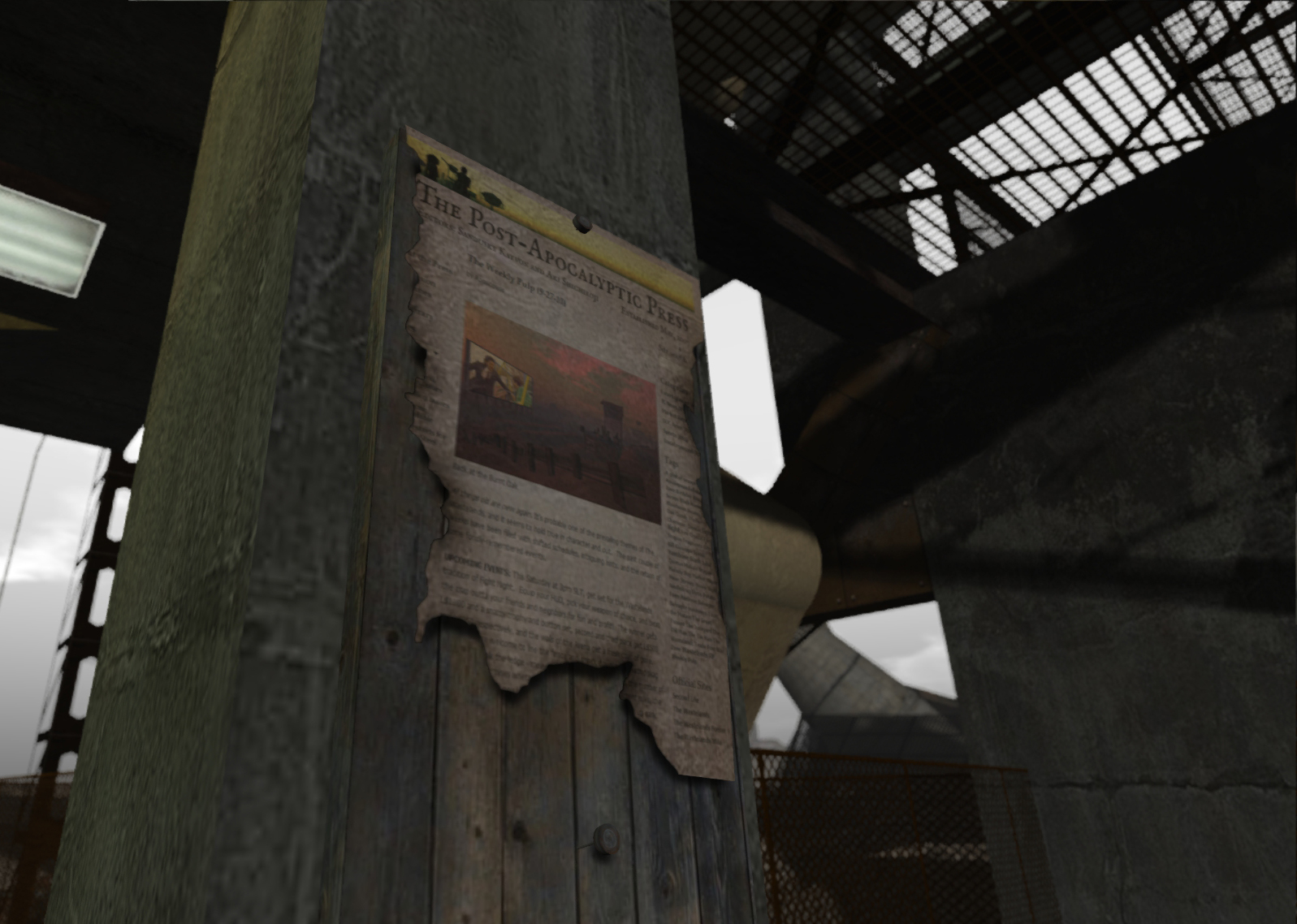 Shelter.  That’s all a body could want, this deep into the season.  Somewhere to hole up against the cold, when not clawing needful things from the unforgiving sand.   Some scrap of ground to claim for oneself, to make safe.   A refuge.  But refuge is never easy to come by in The Wastelands — and, lately, foul rumors swirl along with the sands.   Tales of kidnapping and blood for coal.  Tales of madness and betrayal.   Any truth – if there is any truth – is half-concealed, if not completely buried.  Like our scrap in the sand.   And, like the scrap, even if we knew we had the true story — would we know what to do with it, or what to make of it?  Is it all so much junk?   When we make something of it, how much do we actually change about what it was, and what it meant?  And do we while away our time trying to unearth these scraps, even as huge undiscovered things in previously ignored places loom large and waiting beneath the hungry ground?

This Week in the Wastes

Apo’s Audio Atrocities @  The Sledgepile, The Wastelands 5:oo – ??? pm SLT
Mashups, bizarre covers, retro, silliness, and whatever sounds like fun at the time.

Broke, drunk actor friends
Slum it in country cottage.
What a piece of work…

The Wastelands Table-Top Gaming Horde Sessions:
The Pathfinder: Curse of the Crimson Throne campaign is drawing near its end.  After months of fighting, the party has defeated the chained spirit of Castle Scarwall, reclaimed the sentient sword Seritheal, and bested the hideous monster that guarded it.  Now they’ve returned to Korvosa, their home city, where anarchy is rampant and a literally-underground rebellion is grouping in the city sewers.   A list of questions and mysteries as long as one’s arm has been presented to each of the players — a last set of problems to be solved before the usurper queen can be dispatched with the powerful sword.  Will the truth come to light, or will the party falter?

Here are the updates from the most recent Community Meetings:

RP NAME-DROPS:    There’s strange things afoot, for good and ill.  Another massive sandstorm has leveled Kronbelt — again — but as its old squatter has vanished, the old Kronbelt Crew has stepped in to sort out the wreckage.  The ruins of the old Trade Post were, alas, nowhere to be found.  But somewhere in the giant sand dune near the center, there seem to be signs of a vast buried building…

The mysteries of the Key and the Courier only seem to deepen.  Every answered question sparks even more – enough that it needs its own full entry, if not two.  For those who want to get up to speed, the major players so far are the Digger, the Mutant Witch, the Pipsqueeks, Frank Hilltop, and Apo.  But be warned: Frank has sworn that he’ll stop at nothing to secure that key for himself, and doesn’t care who he has to off.  Even if it did fall into Frank’s hands, however, this may be nothing compared to the incredibly-vague Bad that might befall if others got hold of it…. Keep an eye out for strangers calling themselves Lajka or Ozgram, or for anyone with a big numbered pack who calls him/herself a Courier.

Meanwhile, Frank’s slightly cracked compatriot, Madeye, has gone missing for a few days.  If he’s out there reading this, or if anyone has word on his whereabouts, get in touch with Frank.  Probably no reward, but probably no getting your skull bashed in either.