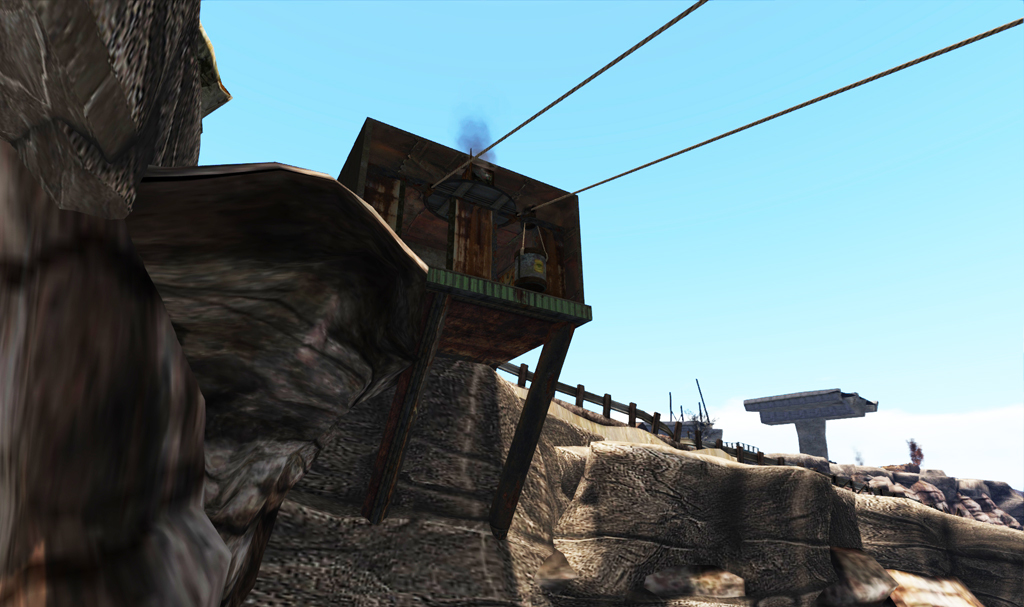 Winter digs in the knife one last time.  Pellets of ice, hard and sharp and slick, pummel everything.  The business of scavenging and trade go on unabated while the sheets of ice and sleet cover our actions.  Wastelanders seem inspired by the foul weather.  We, too, harden ourselves and strike with surprising force.  What’s left in the wake of our wrath turns even the most familiar routines into precarious balancing acts.  The slopes grow slippery and it’s only by twisting ourselves that we remain upright.  Sometimes, we are hurt more by this contortion than we would by letting ourselves slide, letting ourselves fall.  Sometimes, we’ve been slipping all along and it’s only by changing our usual ways of going forth that we find our footing.

Guerilla Learning @ TBA 4:00-5:00 SLT
Thematic documentaries and post-apocalyptic television, at a different spontaneous location every week.
This week: Documentary Week – the topic as unknown as the location.

Held just off the docks of the Cape of Ruin’s hub, last week’s Guerilla Learning showed Episode 4 of The Colony.  Called “Safety and Security,” the episode profiled the Colonists’ continued attempts to fortify the building against intruders — contrasted with their attempts to barter well with a group of strange traders.  To follow were two episdoes of Thundarr, The Barbarian – “Mindok, the Mind Menace” and “Raiders of the Abyss.”  As a special bonus feature, the night ended with an episode of Monster Garage, where the build team made a remote controlled car of a 1970 oval racer.

March 21st’s documentary was The King Of Kong: A Fistful of Quarters, which followed the intense competition for the world record high score in Donkey Kong.  Ambitious and duplicitous champion, Billy Mitchell, found his seemingly-unbreakable record threatened by the mild-mannered Steve Wiebe.   Though tangential to the post-apocalyptic theme, it still provided Wastelands game players with interesting insights on the origins and appeal of video gaming, as well as the nature of competition and sportsmanship.

The Pipsqueeks’ new team-based combat game, Squeekertag, had its opening match on Friday, March 16.  Though attendance was somewhat low, and the players had to face all the usual stumbling blocks of unfamiliar rules and uncertain strategies, all were agreed that the game is a fun new take on Wastelands fighting.  After a few refinements, Squeekertag will return to the cage at  Pipsqueek Hall on Friday, April 6 at 3pm SLT, and will take place every week at that time — but unlike other games, it will be open to league members only, so sign up now! Speak with Jordy Parkin for the complete rules and for a league application so you can register your team of two (with one optional substitute), then compete each week for your chance to earn the grand prize – the Squeekertag League Trophy, made in 100% mesh by Pandorah Ashdene!

The party disposed of still more Grey Maidens on their way toward Castle Korvosa.  Their trek was interrupted slightly, however, by their leader, Sabina, swooping down on a large black dragon.  Although most members of the party were familiar somewhat with Sabina, and though all knew of rumors that she was not as in thrall to the Usurper Queen as she appeared, the wizard did not recognize her – and with the random effects of a Prismatic Spray spell, shunted her into an unknown plane of existence.  Though whatever information she had, or help she could provide, is now lost for good, she’s at least no longer any kind of threat — and the Grey Maidens themselves will now be thrown into disarray.  Little now stands between the party and the justice they seek, and as the session ended, they were arriving on the parapets of the castle’s tallest tower, preparing to sneak inside.
ESTATE NEWS:

Savage Tales is still ongoing!  A forum-based storytelling contest run by Ccindy Pfeffer, this month’s prompt is for a tale about a Ghoul and a Sandworm.  There’s only been one submission so far — and if participation is still lacking, this may be the last month that it’s run.

RP NAME-DROPS:   Kidnapping.  Secret missions.  Sabotage.  Acts that some might call betrayal – and others call redemption.  The Ghouls of the Black Market kidnapped Lajka, a young and unhinged Firestarter, with the intent of selling her to Frank, the scoundrel who wants her dead almost as much as he wants the Key for his own.  However, she was set free by the Pipsqueeks, aided by the unlikeliest of allies: the ghoulish Kitty.

Her actions were not without consequence, however — neither for herself nor her allies.   Though Harvey, the barman of the Cape, had thrown his trademark hat into the ring for the Pipsqueeks, this loyalty may have been his undoing.  One barrel of his zipline is dashed on the rocks at the foot of the cliffs — the rocks spattered with blood, and that distinctive hat nearby.  Rumor says that Smokey, the Black Market’s new leader, is behind the sabotage of the zipline.  Whether Harvey is alive or dead – or, that rare possibility, dead but alive again – is still unknown.