((Gently edited for grammar and punctuation and the like, these are the logs from the Barrelhead Bazaar of 5/6/2017.  In-character or out, I feel there’s little analysis I could provide that would be as gripping as the raw story.  All credit to Ned (Aborted Stickfigure,) Irk (ShannonWilsonBell,) The Mutant Witch of the Wastes (Ccindy Pfeffer,) GutterBlood Spoonhammer, Wolfhard German Chaffe (Wolfhard,) Bloody Freaking Mary (ThatIdentity,) Jason Freddy Meyers (ThisIdentity,) and – of course – Doktor Aeg.)) 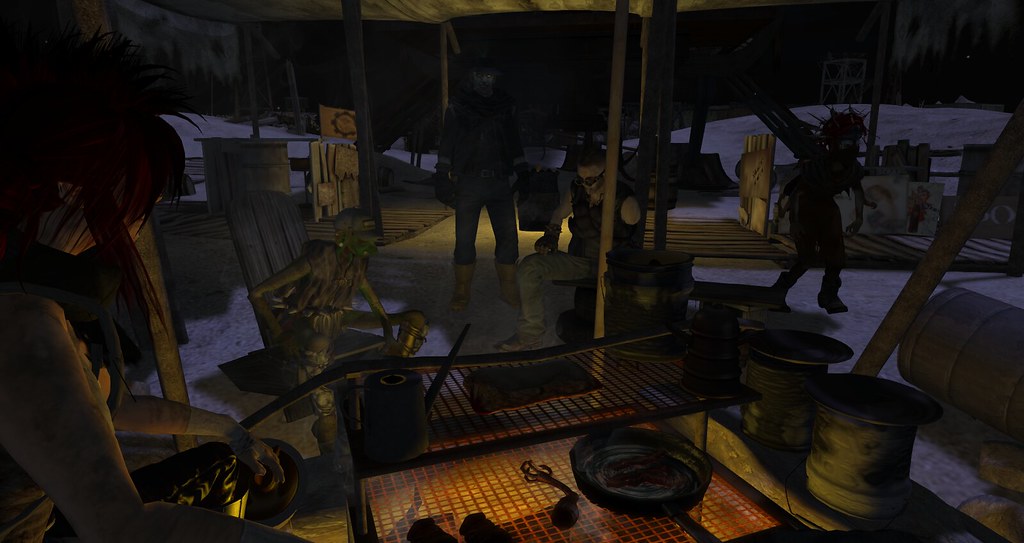 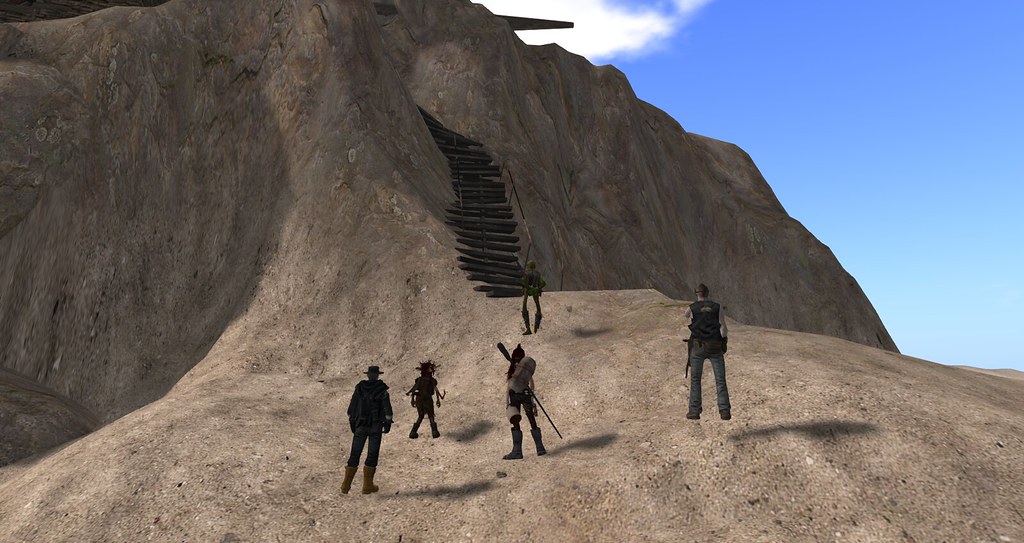 GutterBlood Spoonhammer takes up the flank eyeballing Irk and the witch carefully.
All climb the steps and weave through the old ruins toward the cave within.
Irk creeps in…
The Mutant Witch of the Wastes studies her brother, his feelings making her worry even if she doesnt know what’s going on yet.
The Mutant Witch of the Wastes says, “So coward place.”
Irk stops short of the hidden bed. “It is there…” 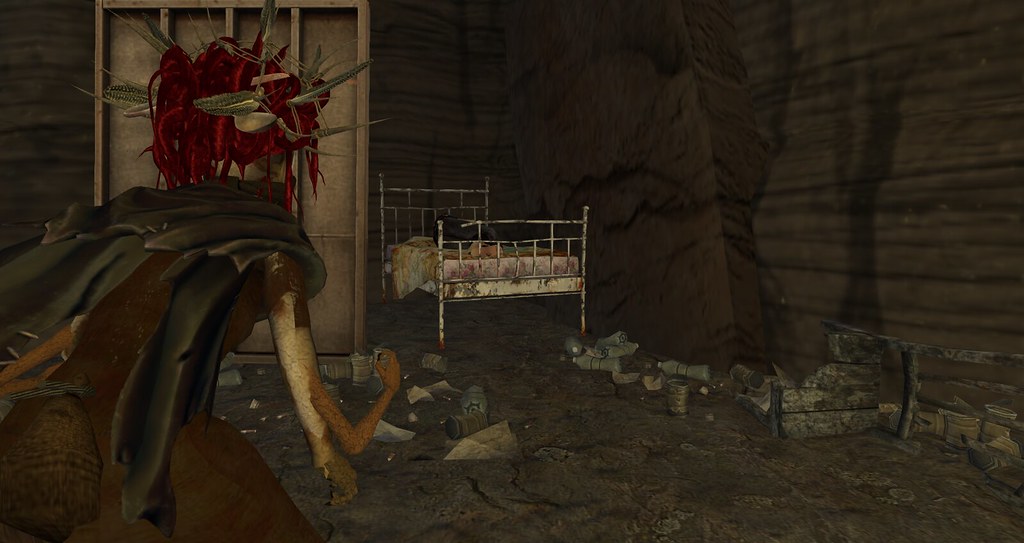 Aposiopesis Fullstop steps closer to the partition, her grip tight on her jug.
Irk keeps his distance from Aeg.
The Mutant Witch of the Wastes looks around. “Hmm. Coward cave. Is that where shaman be? All scrap…” She mumbles to herself.
Ned groans and stretches his back with his hand placed on the small of it.
GutterBlood Spoonhammer wipes the grit from his knife on his shirt and measures the edge with his fingertips.
The Mutant Witch of the Wastes goes a few steps closer and takes a look at the stranger on the bed. 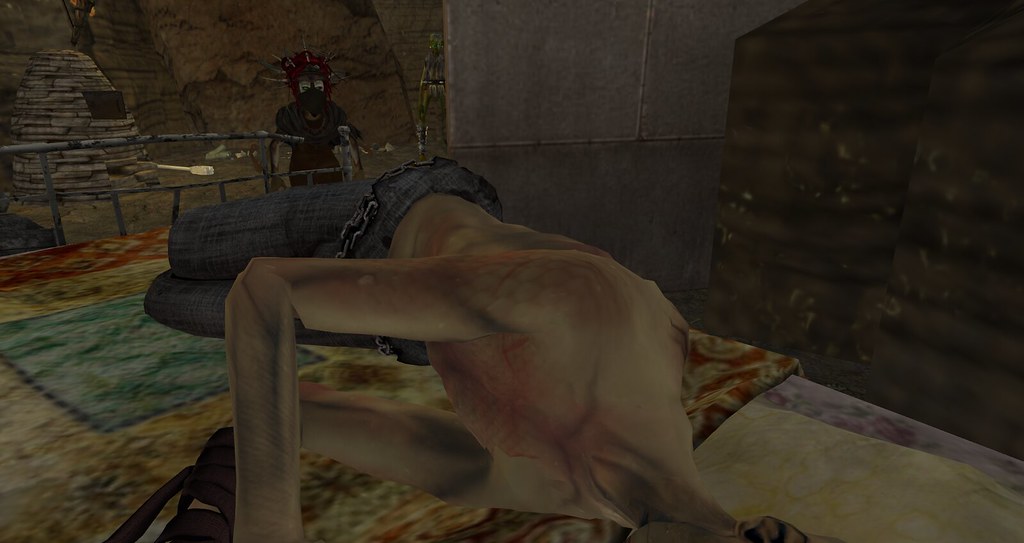 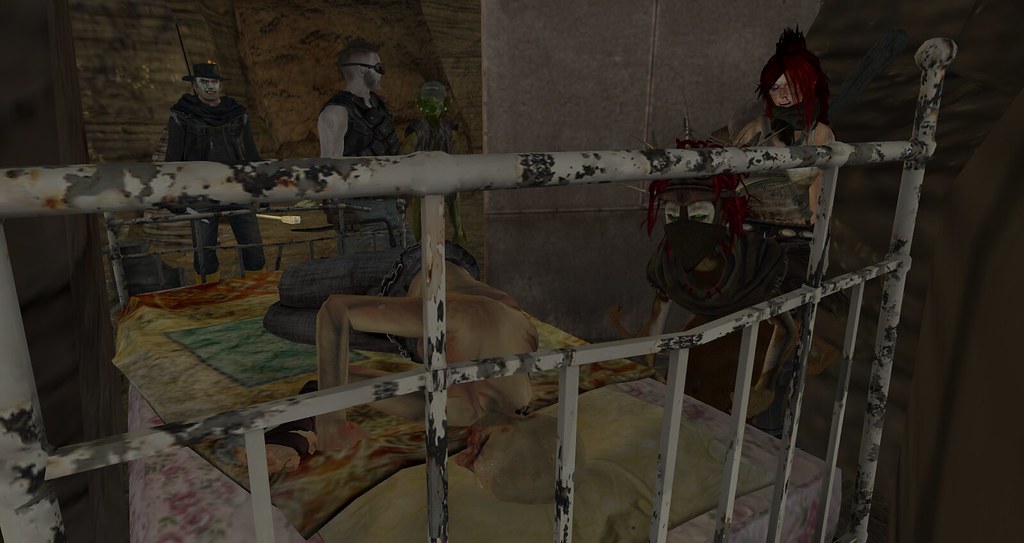 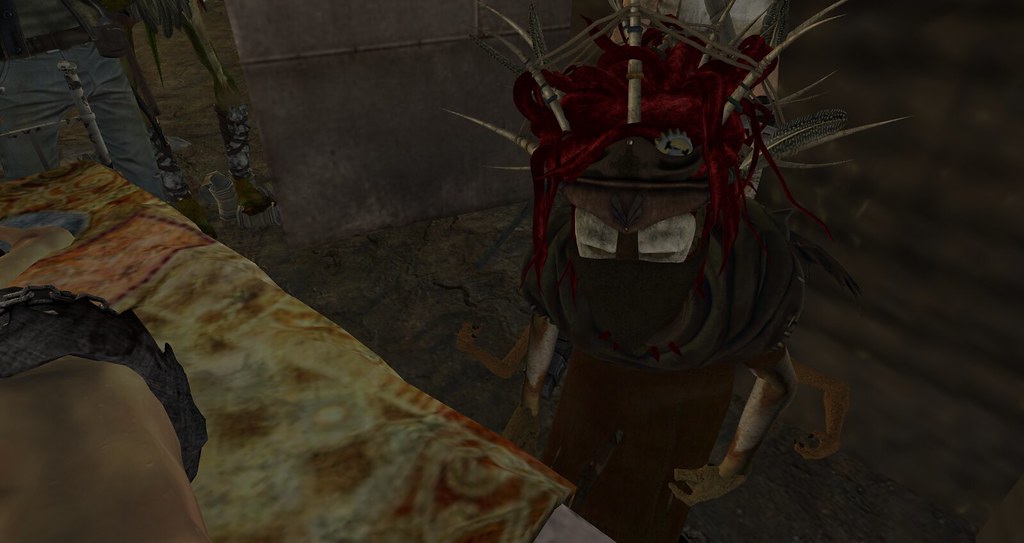 Aposiopesis Fullstop continues, “…He tried. He tried t’ save them as saved him. They jus’… died. All ’round ‘im. An’ then he died too.”
Ned hooks his thumb into his belt and looks down at the witch before responding about the future with a quick remark: “Future is now.” He turns his eyes back to the sick Aeg and shakes his head some more, highly aggravated.
GutterBlood Spoonhammer says, “You wanna know de future?” He points his knife at Aeg. “There it is.”
Aposiopesis Fullstop says, “Future? Thass the future. Dyin’. Dyin’ too soon, ’cause folk wanted t’ let a good person twist in th’ wind for not bein’ what they wanted.”
The Mutant Witch of the Wastes says, “Me .. me no care past!” She tries to sound strong again but fails miserably. “It be brother. It must… it must be return…. Why yous no understand?” Her hands are in search for something on the ground.
Aposiopesis Fullstop says, “If he is your brother, then help him. Help him remember what it is to be a Mutant. Ned… Gutter… Malice… they are eager to help him be a Ghoul. They welcome him with open arms.” She glances at Ned. “Or… y’know. Arm.”
“I cain’t do nothin’ to help him,” Apo says distantly. “I kin talk. An’ give dumb li’l gifts an’ stories. But I ain’t nothin’.” She looks down at the Witch again. “You… you’re a Mutant. You know the ways. And you’re his sister. Who else can help him but you?”
Irk chokes suddenly and coughs heavily.
The Mutant Witch of the Wastes says, “It MUST not be!” Her hands shake and twitch. She has a rock in her hand – but can not even keep it in her fist. “There only be one help. Me be risk me spirit at Fire King. Yes! Must be done.” She stands up, shaky. “Me sorry, brother. Fire King forgive me….”
Aposiopesis Fullstop frowns, her face pale. “Jus’ what do ye mean by that, now….”
GutterBlood Spoonhammer points to the entrance of the cave with his empty hand. “Out der is a buncha slavers, far as we know. An they got more supplies den anybody. En a got damn thronegiant with fists de size of oil drums.” He pauses to spit a ball of pus onto the floor. “I dun give a damn what none a yall think when ye cuddle up to yer tents and yer bunkers at night nice ‘n safe. But the dok has seen all dat, and if yer countin’ on survival it’s best te know what yer up against.”
Irk grunts in grudging agreement.
GutterBlood Spoonhammer points to the dok with his knife. “You dont gotta like em, but he done more for our safety than any sorry sack in this whole dirty little scar in the sand.”
Ned scoffs under his breath and shakes his head but remains silent at the remarks. He was starting to loathe the company of the mutant witch and growing impatient as he gestures with his thumb, hand leaving the frame and pointing back at Gutter. “He’s got ‘er point…. Ya’ll have fun wit yer fire king…. I’s gon’ keep look’n fer dis other one sit’n on his throne… an spread e’s entrails ‘cross da sands….” 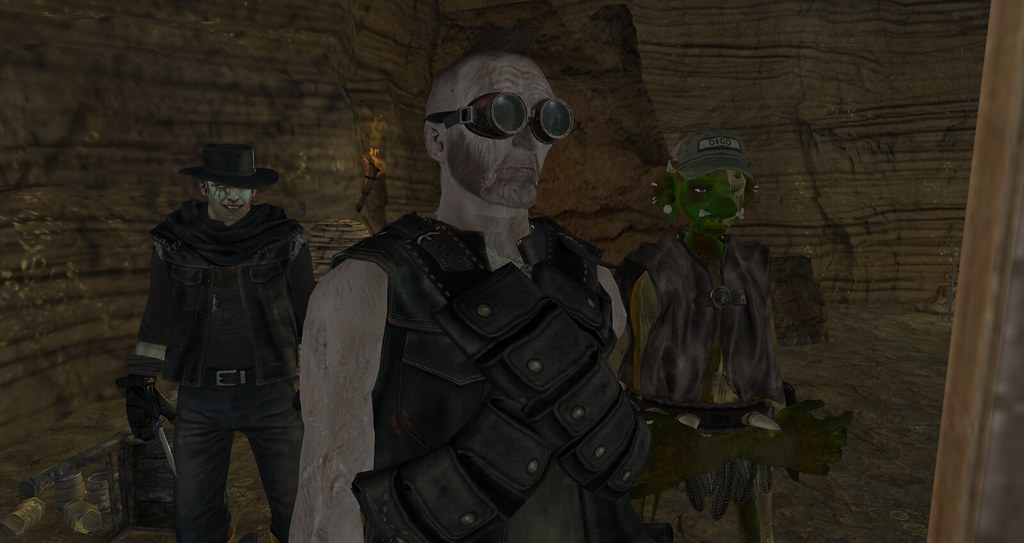 Aposiopesis Fullstop nods as Gutter speaks. “He’s t’only one knows what t’ watch for. Who done this. Who’s gon’ do it agin, if we ain’t careful. Whoe’er got Aeg.. they’re gon’ come fer us too. For Aeg, for the Traders, for all them as trade w’ Traders, or trade w’ THEM… ”
The Mutant Witch of the Wastes stares at Apo coldly, eyes still bloodshot. “Yous think killing brothers be not punished?” She raises her arm, her fist with a new stone in it, much smaller than the first one but still a stone. Just like she’s in a trance, she turns towards Aeg again and attempts to beat him once more.
Ned tries to barge his way through Apo to attempt and lunge his only hand up to grip the mutant’s wrist as he snarls, “Git… yer hed… out… yer arse….”
Aposiopesis Fullstop says, “An’ I ain’t unnerstand the connomy stuff very good to unnerstand the WHY, but these people out there got weapons an’ they’re gunnin’ fer us!” she declares, trying again to grapple the Witch and pull her away. “They’ll get ye, too! ALL us!”
The Mutant Witch of the Wastes finds that Ned has no trouble at all holding her back, she gave up before she’d started.
Ned lets go of the witch’s wrist and leans away while grunting, his back still a mess. “Ya’ll muties need ‘ta git yerselves ta’gether an stop yer nonsense; dis affects ya’lls too… git yerself ta’gether….”
Irk whispers: “You do not understand…”
Aposiopesis Fullstop says, “Whate’er done this… is bigger’n Aeg. Could lift him in one damned fist, an’ still look ‘im in the eyes. Could throw Aeg ‘cross a cavern. It mus’ be a Mutant, too. An’ it tries t’ sit on some throne inna cave like a king,” she says, sneering. “So, you let this Mutant die,” she says, pointing at Aeg, “You let THAT one live. An’ it comes t’ try an king o’er us all.”
Irk says, “It spoke of this giant?”
Aposiopesis Fullstop nods slowly. “He said many things. He would have said them to you, had you reached out your hand to him.”
The Mutant Witch of the Wastes says, “You… no understand…. It be bigger than yous, me, today, tomorrow.” Her eyes feel empty, her voice cold and tired. Stumbling, she gets out behind her, but lets the rock drop by her side. “Me tried warn, me tried do. Me cursed meself. Yous be fault….” She stumbles out towards the end of the cave.
Aposiopesis Fullstop slips a bit on the stone as the Witch pushes past. She sighs.
Aposiopesis Fullstop: “Me too,” she says to herself. “Me too…”
GutterBlood Spoonhammer watches the witch stumble past. “Yer right, it IS bigger en us.”
Irk ignores Apo’s barb and turns to leave with the Witch.
Irk whispers: “You understand now…”
The Mutant Witch of the Wastes nods almost unnoticeably.
Ned looks over and sighs, feeling some empathy almost for the witch but still shaking his head. “I’s need ta get me back unfuk’d… den I go look’n fer dis giant a’gin….”
Aposiopesis Fullstop watches Aeg quietly for a while. She shifts her jaw again, as if about to say something – but she stays silent. All that happens is that a few flecks of dried blood crackle and fall from her cheek.
Irk becomes agitated and runs out.
GutterBlood Spoonhammer looks at Ned. “Ye up for some grub?”
The Mutant Witch of the Wastes stumbles out into daylight with her brother.
Ned shakes his head. “Yeah, an I needs me a smoke. Dam mutie things… always git’n outta hand wit dey stuff.”
GutterBlood Spoonhammer says, “Imma head back and check on that can.” He looks back at the Dok and expels a raspy sigh.
GutterBlood Spoonhammer heads towards the exit of the cave.
Ned shakes his head. “Bet a buzzard ate it already… bet ya one scrit on dat….”
GutterBlood Spoonhammer says, “Ye aint gittin ma scrit and ma grub.” The voices echo from the tunnel leading out.
Aposiopesis Fullstop seems to take no notice of the conversations around her. She just watches Aeg’s chest rise and fall, his scales glinting in the torchlight.
Aposiopesis Fullstop listens as the last echo of footsteps dies away. When everything is quiet but the sound of the flames, she sniffs loudly. The back of a grimy hand rubs her cheek, coming away marbled with blood and tears.
Aposiopesis Fullstop places the hand on Aeg’s shoulder for a moment.
Doktor Aeg tosses and turns fitfully, as if having a nightmare.
Aposiopesis Fullstop swallows hard, squares her shoulders again, and walks past the partition. “Rest well, Aeg. I’ll be back t’night.”
Aposiopesis Fullstop clomps out of the cavern.