A low number of participants this week led the Tin Man to co-opt the event towards Fight Night. A record low of four competitors were pitted in a series of two-on-two battles inside the Potato Farm to determine whom would walk away with a cash prize of L$750 each.

Aposiopesis Fullstop was paired with newcomer Shawn Topaz.  Also new to Fight Night, Caine Toll and Tomothy Conover were paired together for battle.

Neobokrug Elytis announced the fight would be a best out of five tournament and began the round with a clear map.  Out of the gates, Aposiopesis and Shawn fought with board with nails and rattlesnake in hand, flinging blood and poison against Caine and Tomothy’s bloody dual knife solution.  The combination of map, weapons and fighters turned out to be a long-winded but eventually nail-biting round, as the fighters fell one by one in the heat. Despite Tomothy freezing up early in the match, Cain and Tomothy were able to down first Shawn and then Aposiopesis.

In the second round, the combatants faced ‘The Gap’ floor configuration, which includes numerous spikes, poison and pit traps. Returning after a short healing period, Aposiopesis and Shawn returned with knife and rattlesnake this time in an effort to overcome the opposition’s retinue of knives. The difference in floor structure proved to be a major factor in the match this time around.  The newcomers soon learned the danger behind these traps, however not before many poison and spike traps were tripped.  Caine fell first, then Shawn’s effort was interrupted with a spike.  Finally, Tom fell to Aposiopesis’ blade.

The arena again reared its ugly side as yet another map called ‘Saw Edge’, featuring a ring of saw traps, replaced the previous configuration.  Caine returned with a crowbill, but otherwise no other weapon changes were apparent.  Shawn fell first, then Tom.  After some extended chasing, Aposiopesis at last fell, allowing Caine and Tomothy a win for the third round.

No weapons changes for the fourth round, however the map was again changed, this time to ‘Tron’. This proved to be a slow and contentius battle, as numerous combatants fell – first Shawn, then Caine, before Aposiopesis slowly and methodically stalked Tomothy around the arena’s traps, finally claiming Round Four for her team.

The tiebreaker round featured the ‘Russian Roulette’ map, well known for spikes, and gas traps near the corners as well as mines near the center.  These traps caused great difficulty throughout the match – much blood and poison damage became apparent as the match progressed. Finally, Shawn fell amidst avoiding Tom’s knife, and Aposiopesis fell while chasing Caine as she was downed by a mine.

(( Warzone is usually held at the Potato Farm every other Saturday at 3PM PDT.)) 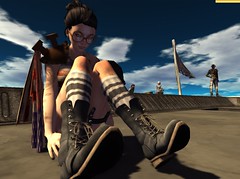 More photos from this and other events covered by The Post-Apocalyptic Press can be viewed here.