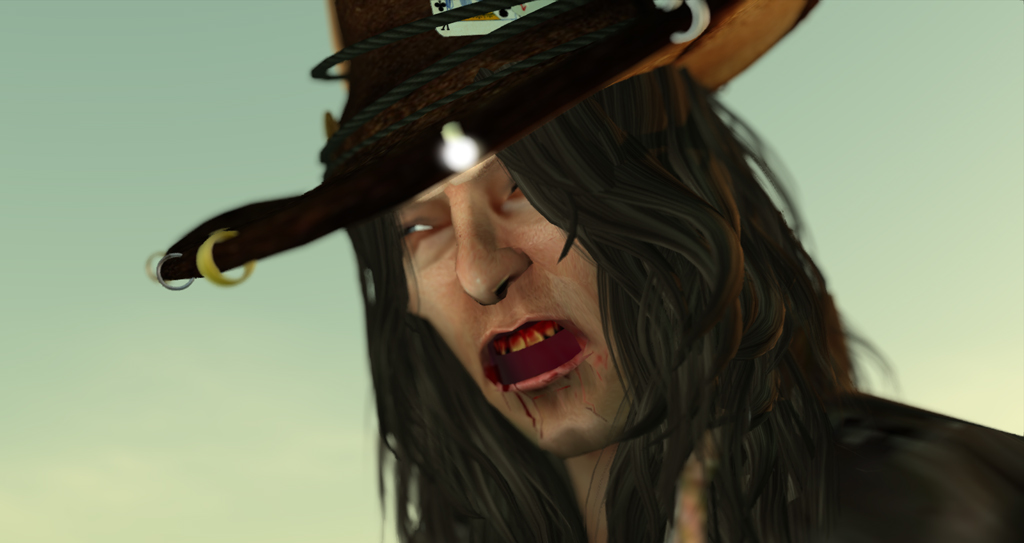 No Pulp this week.  Only pulp happening here is the bloody masses I keep coughin’ up.

Writing anyway.  Writing and drinking.  Takes my mind off the sick.  Can’t hardly keep focus to write, but it helps me anyway if nobody else.  Too sick n drunk to care.

Don’t care if I’m writing like i talk. Was always taught to use the right words at the right times, to write better’n you talk, ’cause it lasts longer.  Don’t last long enough sometimes.  Even with all my parts full of pain, I just want to keep doing somethin’.   If this plaig is gonna get me ded, oughta least die doing somethin’, ’cause i’m gonna be doin’ nothing forever soon enough.

Least oughta write down what happens so if all us sick folks go n snuff it, anyone who reads this will know the signs and know who to set on fire on sight.  Fire kills lotsa things.  Even keeps ghouls from coming back.  The Sick so strong it’s even getting mutants and ghouls.  Hard knowin’ how that works.

All started simple enough for me.  Was talkin’ to Kitty, the ghoulcat.  She was one o’ the very first to catch the sick, after Smokey.  Said she thought it come from bad meat she and him cut off a Tusk in the Junkyard. Anyway she said her throat was itchy and she weren’t feelin’ so great. She tried eatin’ some food but she couldn’t keep it down.  Would just stop an’ puke up blood if she’d eat too much.  No matter what she ate, she just couldn’t get better.

They got it spread to the Cape pretty quick at some big meeting with the barman and the kids and others.  They all started tasting blood n feeling awful n wondered if they’d been sniped.  All freaked out a bit, then realized it was somethin’ maybe worse.  That why i dunno if it came from the Tusk meat  – I ain’t got anyone else sick when i ate bad food.  Maybe that Tusk had the sick already or not at all.  Fore long, all you hadda do was just be near a person with the sick and you got it too.

Found that out the hard way.  Ghoulcat come up to me when i’s paying respects at the big gravesite in Hambone Slash.  Hindsight say it’s a bad idea spendin’ time round the bones and corpses.  Especially not knowin’ what kilt them.  Way the Bog been acting lately seems familiar.  Like when Bloodmoss Swamp gone bad.  Moss looks a little funny, water smells worse than usual, and something just feels off.  I put it down to maybe them bloodmoss spores spreadin’ again but this was different.

Ramblin’.  Gotta thinkin’.  Head pounding like a mutie’s dancin on it…

Like said, the ghoulcat didn’t touch me even once and i was standin’ well away.  After some time i started feelin’ bad too.  Throat itched. Think’d it was just sand in my throat, but i got all woozy and tired.  Me an the ghoulcat sat for a bit, tryin’ to figure out what was goin on.  Tried to eat different things lookin’ for a cure, but there weren’t nothin’ we could eat that would stop it.

I almost could’ve swore bacon cured it though. I’d eat some n then I started feelin’ better, and I didn’t hork it back up none, and didn’t feel dizzy nor tired nor nothin’ for a good long while.  Soon as I come back home, though, I was spittin’ mouthfuls of blood again.

Thought I was well enough to go to the Bazaar though.  Figgered it would be good to talk, see if someone else knew what was goin’ on, or found some cure.  No luck.  All that happened was some folk showed up feelin’ fine and they took the sick home with ’em when they left.  The Digger had been doin’ just great, but after a bit, he too was coughin’ up a little blood.

Only got worse over time.  Spread round to more n more. You’d think you’d got used to it.  That you knew what was comin’, but then it would do somethin’ else.  My eyes watered for a bit n i just wished they’d stop…they did til they got so dry they was like wads of paper cramd up unner my eyelids.  My head felt like it was full up with swamp gas and fit to float off.  Not long after, I couldn’t hardly hold it up…might as well been filled up with ingots.

Days drug on.  Couldn’t eat or drink or find nothin’ that helped.  Not me nor nobody.  Every day we were eatin’ less an less.  Every day it hurt more n more. Cold chills make you shiver so hard you think muscles gonna rip off the bone.  Headaches stabbin’ strait through your skull over n over.  Joints aching.  Mouth gone sore n dry.  Only wet again when you cough up yer blood from lungs which feel like sacks of knives.

I’ve woke up from bein’ knocked out n still felt better’n i do now.  Just as weak n weary, but least that’s just pain.  Not my body hurtin’ itself from the inside out.  Can’t barely eat a strip o bacon or piece of green fungus w’out it all comin’ back up tinged w’ blood.  Only thing i can keep down is my moonshine.  It don’t cure nothin’ but it sure makes me feel better ’bout it all.  Or least not care so much.  Can’t focus on nothing anyhow.  May as well get myself drunk cause booze comes from plants n plants is healthy!

So that’s what it’s like, but ain’t nobody knows what the sick IS still.  Lotsa guesses:  Bad meat.  Rotten food.  Bloodmoss spores.  Swamp gas foulin’ up our lungs.  Somethin’ churned up from sand or mud.  Sick outsiders.  Bug eggs hatching worms in our guts.  Maybe giant rats…some say they carry disease. Couple crazies blame it on an invisible monster spirit called the Baktria.  If’n you gonna do that might as well call it a curse.  I ain’t much fer superstishuns, but you know yur outta clues when curses n spirits sound as good as anythin’ else.

The sick’s got me tired and tired most of the not knowin’. The tryn to think and figger things out when we just don seem to know enuff.  Always tryin to fix things cuz thas what we do.  But we gotta think up new things to try when its hard to remember livin like normal.  So far nothins workd.  Ain’t nothin somebody hasnt tried at the masheens fer a cure.  Seen folks gathernd near the ole bunker, shiverin in the warm sun, sweat beads streaming down skin, tryin to figure out what to do wit what lil energy left.  Keep masheenin? Keep searchin the sands?  We done scourd the sands n still aint found anythin new…

Hard not to get discurrgd.  Some o the hardiest folks is facin their death.  Second death fer some em.   Overhurd clan leaders talkin bout who’s gonna take over when theyr gone.  Folk askin each other to look after their ole squats, sayin they can move in – if they don die from sick too.  No avoidin it hardly.  You try n work together to help each otha solve the problem but you only spread it round.  But if you stay alone you got nobody to help at all.

Was gonna say somethin.  Bout things… earlier… Birds. BUZZARDS.  The buzzards are out again.  Hadn’t seen em in moons.  I was a bit hopeful at first – they’re not sick, after all.  Been feedin’ on the fallen in Hambone Slash, but they just fine.  So i shot me one.  Hoped it would give me some clue bout how they can eat bad meat n breathe bad air n still not get sick.  I got nothin’ more n usual.   Was gonna look at its beak n see if it had somethin’ in it that made it block the sick.  Thought I’d grind it up in powder.  Eat it.  Snuff it up to block it or cure it.  No luck.  Too tired to smash it up. Too weak.

Made a necklace of it instead.  Dunno why anymore.  Fer good luck or just to do somethin’ with my hands other’n clutch my chest n my hed.  Just somethin’ to do with my brain, while i got a little left.  Just somethin’ to forget about how them birds are probly no sign of nothin’.  Just here to feed when this sick kills us.  Least it’ll let me spite ’em.  Make ’em hafta stare at one of their OWN’S bones before they go pickin at mine.

Might be I’m more superstishus than i thought.  If i dunno what’s goin’ on, it sure feels better to tell myself a story.  Even if all’s lies.  Especially if all’s lies.

With no truth to go on… no clues… no anything… stories n struggle is all we got left.  Gotta hold out long as we can.  Keep tryin’ things.  Keep lookin’.  Keep fightin’.  Right up to the end cause that’s all this land’s ever asked of us – and sometimes, you go down fighting.  Another sunrise comin’ soon.  Always somethin’ new under its light.  No tellin’ what the sands will uncover or who’ll come over that horizon before the next sun sets…