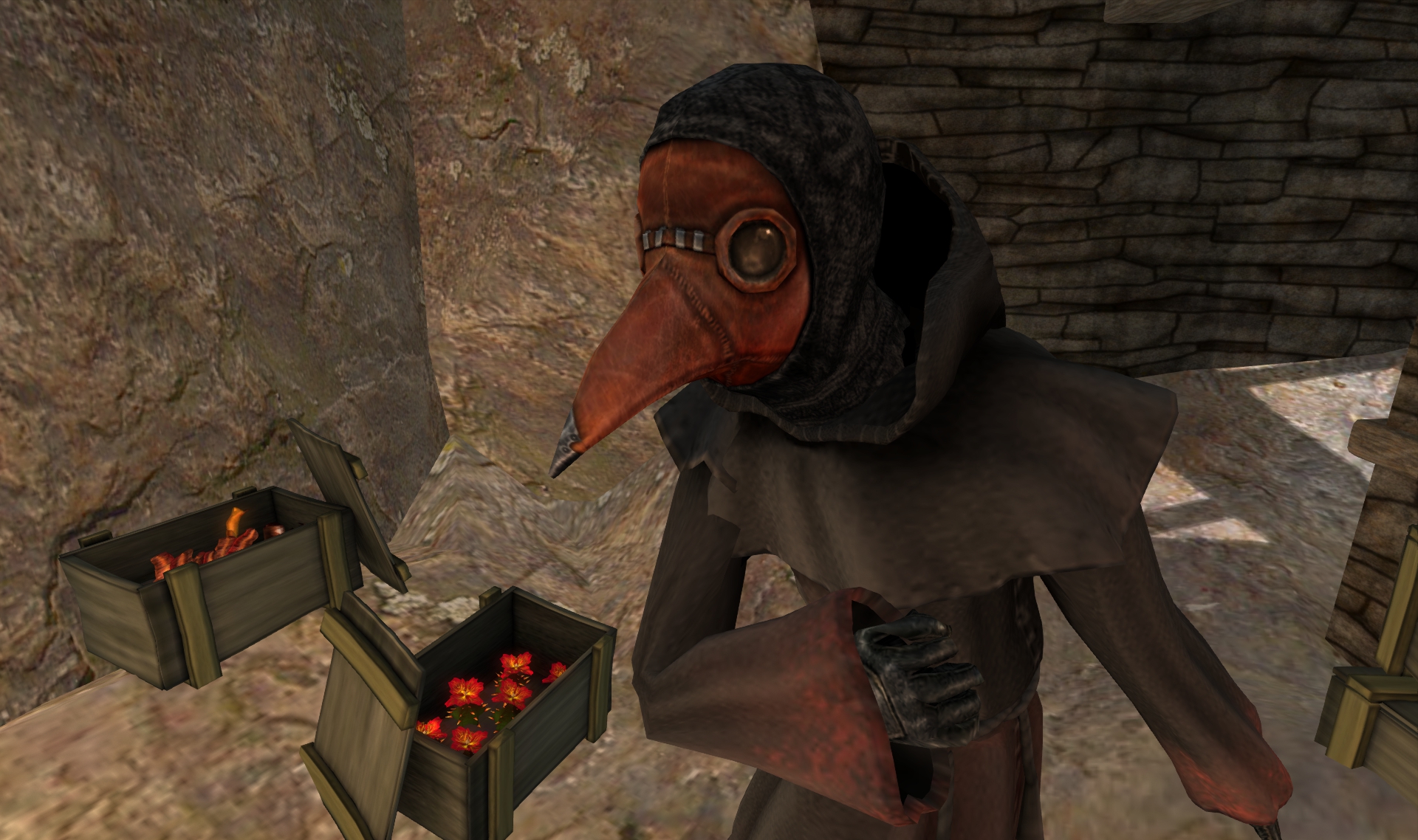 A curving beak.  Round glassy eyes.  A scarlet scalp.  These features usually describe a common critter known well to Wastelanders:  the turkey buzzard.  A simple-minded but patient scavenger bird valued for food and feather by many hunters.  Young and old alike know this bird is a sky-sign.  An airborne omen of death’s approach or its arrival.  The watchful scavs have already noticed the return of the birds…drawn by the scent of blood and death hanging on the sick, and they have not come back alone.  Following their wake, a masked stranger has arrived bearing their likeness and a name for the bloody plaig in our lungs.  Last but not least, this stranger also brings hope to save the Wastelanders from their spreading disease.

The stranger’s name is Aeg and he is a “plaig doktor”… one who travels far and wide in search of disease to study and learn from it.  And to stop the sickness if it’s not too late.

Doktor Aeg is a tall, thin, and creepy figure clad in a long dirty robe, but his most distinguishing feature is his mask.   Beaked, goggled, and fashioned from reddish leather, the mask strongly resembles the turkey buzzard.  So much so, some of the seriously ill scavengers mistook him for a manimal when they first met him.  Despite his creepy appearance and muffled voice, the Doktor speaks in a polite and sincere manner that seems to calm most sickened scavengers if not the stubborn.

The mask’s beak houses a daily preparation of aromatic herbs to ward off illness, but its resemblance to the bird is possibly intentional.  For the Doktor, a wake of turkey buzzards is a guide to follow, a sign pointing him toward the next town or village where he can help in one way or another.  Help to heal…or help to bury.  “Not everyone can be saved” he admits.

Following the sky-sign of the buzzards across the southern sand seas is how the Doktor found the Wastelands.  From atop the High Mesa, he looked north and recognized it as a settlement he visited many seasons ago.    After making camp in the mesa’s ruins, rising smoke from the Barrelhead Bazaar caught his attention, but not the fragile stair railing that broke from his weight, tossing him down the side of the mesa into a pool of soft sand.

By then, several scavengers, weak and exhausted from the illness, were already gathering around the bazaar’s firepit.  Conversations were brief and tense, grumpy and agitated.  Voices were broken by ragged fits of bloody coughing.  Lips were cracked and bleeding.  Eyes weary and exhausted.  ((Alpha “tattoo” layers representing the bloody “Rustmouth” sickness among the races can be found at the Barrelhead Bazaar in Cormac.  Touch the blood spittle to receive them.))

Despite the plaig going around, Porter Aiden eagerly tried to spark up some trade but the gathered scavengers were slow to move, too weak from their illness.  The Witch asked around about bees nests but wouldn’t say why.  The Digger half-heartedly watched the bacon fry in its grease because no one had the stomach for it.  When the Doktor’s cries for help carried across the sand, few had the will or energy to care.  The chances of surviving the plaig might’ve ended there, if Aposiopesis Fullstop had not followed his cry and pulled him to safety with the barrel of her slugthrower.

Injured by the fall, the limping Doktor was helped back to the bazaar.  Aeg quickly noticed the signs of sickness among the Wastelanders with bleeding lips and he started asking about their symptoms.  Some answered his questions while others refused.  Tralala Loordes didn’t trust anyone that wore a mask.  The Grotesk sisters, the Witch and Ztar Magic, were verbally hostile toward the Doktor despite his attempts to appeal to their tribal pride and honor.

Despite the mixed reception, Doktor Aeg examined someone from almost every race.  The Digger, Aposiopesis, and even Ztar allowed him to look inside their mouths.  The ghoulcat Kitty stumbled through the bazaar looking for Apo for a moment, only to ignore the Doktor, distracted by her hunt for salvage and birds.  Regardless, he learned from the other scavengers that she and the ghoul, Smokey Steamweaver, were two of the first to be infected after an encounter with a Tusk manimal.  Satisfied with what he had seen, what he hadn’t seen, and what he had been told, he was confident enough to give name to the plaig and pain.  A name the Doktor knows well since he claims he survived this same sickness long ago.

It’s the taste of metal on many lips and tongues from the Rot to the Cape.  It’s the bloody cough and cutting rattle in the lungs of sick scavengers.  And according to Aeg, it’s the name of the sickness spreading on the breath of every infected scavenger in the Wastelands.

Given his personal experience, Aeg knows that Rustmouth can be treated and cured, but he must find the right combination of ingredients.  At his request, the scavengers helped him walk back to the mesa, up the broken stair, and to his camp in the ruins.  Here, in the presence of a worktable, crates, a cot, and an old stone kiln, he described what was needed for his research and how to get it.

In order for the Doktor’s  work to begin, he requested the Wastelanders to help him by gathering a supply of local flowers, cacti, and food.  With these resources, he plans to conduct experiments and research for a cure.  The food may prove easy to supply depending on how much the scavengers have hoarded over the cold seasons.  The sharp spines of the flowers and cacti, on the other hand, require a more skillful approach.

“I know a trick to getting them without hurting myself, and without the plant dying before it becomes useless,” explained Doktor Aeg.  “These flowers are a lot like stubborn mutants.  Pokey and full of anger on the outside, but fragile and delicate on the inside.   You need to take care of them quickly after you cut one.  In order to gather one, it’d be smart to use a long blade ((a Machete or Flayer)).  As soon as you cut it from its roots,  apply some Chemical A to help it recover.  Otherwise it’ll die.”

A few scavengers have already spotted the thorny plants growing in a very contained area of the settlement.  Bound in from the north and south by the barrens, the plants are also repelled by the coastal air to the east and choked off by the bog muck in the west.

After the long day of examination, discussion, and debate, the injured Doktor retired to his cot for rest, leaving the scavengers with a mixture of hope and doubt.  Some didn’t hesitate to drop food in one of the crates.  Some, even the mutant Ztar, gathered their strength, wiped at their Rustmouth lips, and headed north in search of the plants.  A distrustful few, especially the Mutant Witch, still refused to help Doktor Aeg in his research.

Double-crosses and back-stabbing have been frequent lately among the scavengers, often prodded by strange outsiders.  Due to the twists and turns between the locals, the Witch’s distrust of Doktor Aeg may be understandable, but the his desire to help Wastelanders cure their Rustmouth epidemic appears to be sincere.  Doubt such as hers and others may only be veils to cover their wounded pride for relying on an outsider’s healing ways to restore their health.  And Wastelanders are notorious for their pride at survival and self-sufficiency.

Meanwhile, some of the doubtful turn to the salvage masheens with futility…hoping it will cough up a cure from its own rusty maw.  More so than usual, the masheens seem to sit in silence..mocking the sick and healthy alike….

((The resources required by Doktor Aeg are 50 Green Prickly Ball Cactus, 50 Scarlet Spikeflowers, and 250 Food items.  Each resource has its own crate.  Drag the object from your inventory and rez it on the proper crate to add it to the resource crate.  The crates as well as additional RP information can be found in the ruins of the High Mesa of Cormac.

Green Prickly Ball Cactus and Scarlet Spikeflowers will only be found in the 4 main regions of The Wastelands, the Junkyard, the Great Fissure, and Fort Stygian))

2 thoughts on “Mouths of Rust and Beaks of Plaig”