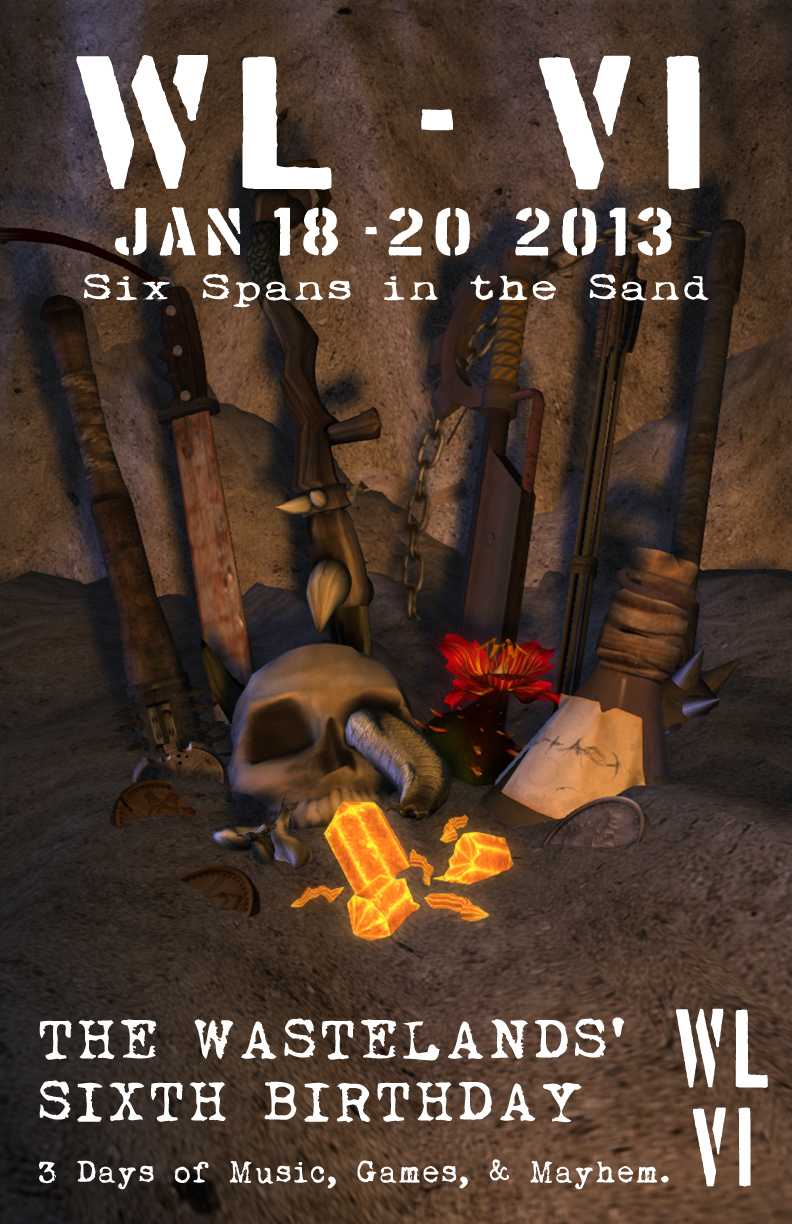 Six spans in the sand.  The sun’s slow arc in the sky has risen and fell six times for some of the local old-timers.  Six cycles since the Great Settling when a sudden and large number of scavengers drifted into The Wastelands with dust-rimmed eyes and dry mouths.

Lost wanderers tumbled over the dunes and into the ruins.  Brave foolhardy explorers crossed the treacherous desert.  Cautious nomads, followed hope and rumor of a place affording some measure of shelter.  Together, they staked their claims and made their homes.  They became Wastelanders, survivors searching for scrap and feeding it into the strange salvager masheens.

Soon enough, these Wastelanders encountered the Tin Man, caretaker of the masheens, and the Founders, a dysfunctional yet deadly crew of skilled crafters, mysterious shamans, and powerful mercenaries.   Often or rarely seen, each worked toward their own agendas in the settlement.  Old traders said they showed up after the last Salvager War to help the Tin Man secure the masheens (for him or maybe for themselves).  Elder mutants feared and loathed them for driving out the largest and oldest sandworms back into the deeper sand seas.  Regardless, their names are still remembered by a few old-timers…names like the Heapkeeper, the Oracle, the Road-Patroller, the Arena Master, and the Experiment.

Within that first season, the scavengers and traders assembled factions.  Alliances formed in pursuit of power or security or information.  Gangs shaped within the ruins, split apart on the rocks, and reformed from the dust.  The Clubs, the Vile Sun, the Mercs, the Reavers, the Teeth Grinders,  the Trade Post, the Renegades, the Black Market, the Pirates, the Ashfall Clan, the Pipsqueaks, Grotesk and any more.

Despite and sometimes due to these clan rivalries, the Wastelanders have experienced many battles and adventures as they’ve struggled to survive and hold on to their home.   They’ve cleaned out a sandworm infestation and its monstrous queen.  They pieced together glowing fragments and the mystery of the Fire Crystal that drove the Tin Man crazy with radioactive rage.  After his disappearance, they fought off the mechanical Brominites as they swarmed in to steal away most of the salvage masheens.

More recently, the Wastelanders twisted and turned against each other over keys, couriers, and the graves of two dead girls.  The tragic fallout from an old lovers’ quarrel between the wicked ghoul Ozgram and the mysterious “Mother.”  In the end, a few scavengers delved deep to uncover the secrets of the old world and secrets of the heart long buried by one and long sought after by the other.  In the midst of this, the Wastelanders also fought off a terrible plague called Rustmouth that spread though the population with painful bloodspat coughing.    Thanks to the tutelage of Doktor Aeg, they tracked down its cure while also learning new skills for harvesting and survival along the way.

As the stories of the Wastelanders have unfolded and expanded over these six years, so too did the settlement.  First, it grew to the east and south where industrious Wastelanders claimed the scrap-piles of the Junkyard, the stagnant depths of the Great Fissure, and the fiery crater of Fort Stygian.  An adventurous few (or some say crazy hermits) still pushed further to the north and south into the desolate regions of Ashvasta, Burnt Oak, Cormac, and the North Yard…collectively known as the Barrens.

Within a couple of spans, the Wastelands’ expansion continued westward.   Huts were raised and houseboats anchored in the wet marshlands of Malady Bog and Bloodmoss Swamp.  The hill of Hambone Slash was conquered and more Barrens where found further south when the dunes of Kronbelt and the ruins of the Rot were claimed.

Unfortunately, circumstances (usually economic ones) bludgeon even the most stubborn survivor and the settlement’s expansion experienced a contraction.  Most of the western lands (Bloodmoss Swamp, Malady Bog, and Hambone Slash) were abandoned.  Despite this sacrifice, we still pushed eastward again to the coast and established the beautifully crumbling Cape of Ruin.

Such cycles of expansion and contraction are common in all things, in every story and every season.  Through it all, the Wastelanders continue to push forward to their next piece of salvage or food, to the next page of their stories, or even to the next version of their salvaged home in the settlement.

Therefore, (as I break character completely) please join us this weekend for a 3-day party as the Wastelands celebrates its birthday with WL-VI:  Six Spans in the Sand!   A wide array of events are scheduled for the party ranging from live music to DJ sets as well as many of our post-apocalyptic flavored games and events!  Stop by for a little bit or all of it and join us as we continue our story into another span of the sun over the sands….

((Special thanks to Red Xu of Red Zone for organizing the celebration schedule this year!))