It was nearly a moon ago now when it happened.  The High Mesa is so far south of most squats, his cave so far up its face, his post so deep within, that perhaps it’s no wonder we didn’t hear.  But the cavern must have echoed with the noise.

The scrape of wood on stone as his writing desk and workbench were overturned. The clamor of cookpots and cutlery.  The serpentine sounds of loose papers. The crack as the plastic bucket fell and sundered, the bubbling glug as the stew flowed onto the stone amid a rustle of ashes, a clink of cooling coals.  A seashore crash of jars.

The dull thuds. The grunts, the shouts, the screams.  The spattering of hot red blood on cool brown stone.

One by one, we found out.  As on any normal day, we went up for Cinderblock Stew or for fistwraps or flasks, or to fill a flask with the Rustmouth Cure, just in case.  But all we found was wreckage, and two thick pools – one of blood, one of stew – glistening in the torchlight.

It looked as impersonal as a sandstorm. His attackers didn’t leave a note or ask for ransom. They didn’t spray their names on the stone. No clan banner was hung on his wall.  So, like hot water rushing into an empty flask, feverish rumors rushed in to fill the hollows in our understanding.

Maybe a Ghoul did it.  Nobody trusts Ghouls.  Many aren’t worth trusting…

Maybe it was that mad preacher, Doktor Pileus.  He and his followers are back again, and maybe, in their shroomed-out frenzy, one of them attacked Aeg.  Or maybe they’re so obsessed with spreading Ghoulism that they’d get rid of Aeg to kill us all through death and plague…

Maybe it was a hungry Manimal, not sated with the stew…

Maybe it was that horrible Dune Trapper, finally leaving the dunes to hunt us down in our homes…

Maybe it was some Outlander – some vengeful survivor of a settlement that had been ravaged by Rustmouth before Doktor Aeg had learned the Cure.  After all, once he did learn it, it’s not like he went back to help the people who were left…

Maybe it was those three people someone saw up there that day. That lady who speaks futures in the Fissure, and a small Mutant, and that cloaked Mutant named Brother Kane.  Kane had been a follower of Jedidiah Stone, after all, and probably still can’t be trusted…

Maybe it was Saul.  Without Aeg and the Stew, who has more to gain than the Food Trader…

Maybe it was even Gill.  That hunchbacked old man hasn’t been seen in spans, but he was bent on controlling the Masheens and on destroying the Tin Man, no matter what the cost to The Wastelands. What if he thought Doktor Aeg’s great knowledge could help him somehow – or could stop him…

Maybe Aeg just hurt himself, got confused, and got lost.

Spraypaint and signs soon went up on many walls, showing the masked face of Aeg and calling on scavengers to keep watch for him.

But others thought it a futile effort. With so much blood on the stone, surely Aeg was already dead.

Why did they do it?

The day after the Red Revival, Doktor Pileus was seen walking the roads of The Junkyard and The Wastelands proper, paying calls on certain Ghouls.  He loitered on the south road of The Wastelands, near the Mutant Almanac, and a crowd began to congeal: Irk, Malice, Sommer,  Lamia, Ned, GutterBlood ((ShannonWilsonBell, Malice Shepherd, CreamySoda, Jennah Ishtari, Aborted Stickfigure, GutterBlood Spoonhammer.)) With cautious tact, Lamia asked the preacher what he knew about Doktor Aeg’s whereabouts.  But Pileus replied that he’d only learned of Aeg’s disappearance that day, and that he was distraught over it:  “And does he NOT preserve the Sacred Shroom, that we may carry it and its transcendence across the wider Wastes?  I tell you, I take no joy in his absence!”

His argument seemed to satisfy Lamia, who went on to thank Pileus for his preachings – and who hinted that she might be willing to become a Ghoul herself, in time.

Irk snorted at the notion.  “I am glad mutant blood will not let the ghoul grow in us. When I die, I will stay that way.”

But Malice spoke that he’d seen some very strange-looking Ghouls in his time.  And Doktor Pileus said that Mutants almost never rose from death – but that some did, and when they did, they were monstrous, dangerous, like Savage Mutants in mindless ferocity.

Irk dismissed it as nothing but a fireside tale.  But GutterBlood, the leathery old Ghoul,  spoke up: “Well, maybe I seen somethin like yall are talkin about not long ago. A weird creature like somethin I never seen before.”

I joined the group then, just in time to hear Gutter’s tale: 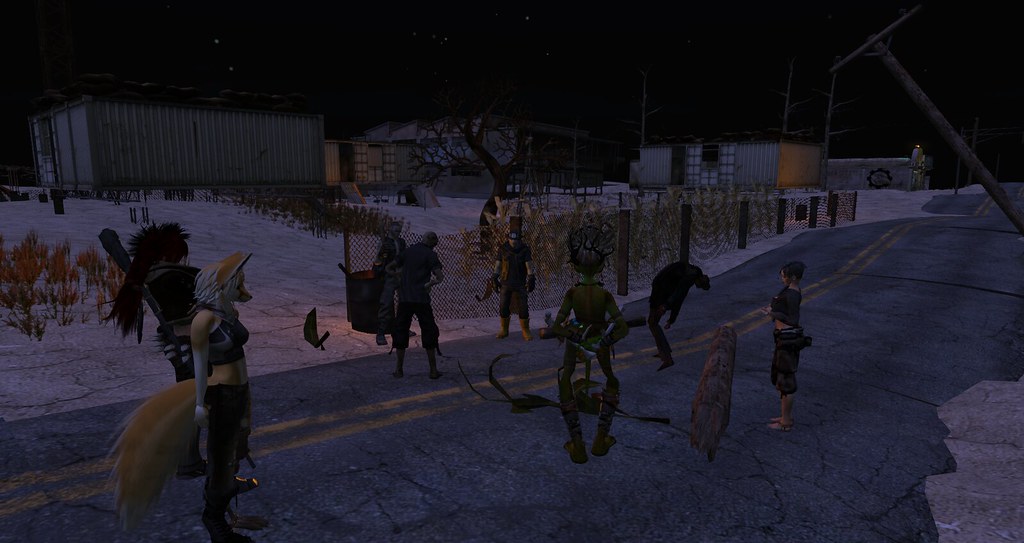 The smug and gold-toothed grin faded, and his cracked lips forged an uneasy frown.

“Well, i know about some horrors, but not too long ago I was out in the sand seas. I was mindin my own business as always, Findin scrap, takin the blessin of the sands you know?

“Then as I’m pickin up a good piece a scrap thinkin ‘Boy this is my lucky day,’ I seent a vision on the horizon.

“And no! It wasnt the sun playin tricks on me cause i blinked 3 times.

“See, at first I thought it must just be another scrapper takin a nap or somethin. But as I got closer the creature seemed to be some kinda weird mutant atleast twice my height layin in the sand, half blown over.”

We stood there in rapt attention, all eyes fixed, all ears open.  Irk, in particular, was nearly breathless. Gutter seemed uncharacteristically shaken, as well.  He swallowed hard, and said perhaps the only thing that could deepen the mystery:

“The real weird thing is, it smelled like a gool.”

For a moment, we could only stare.

“So I walk up to see if maybe there was some kinda loot i could grab, and no sooner than I reach out, the thing lunges at me,” he continued.

Our shocked silence broke, and we flung questions at him like hailstones from a storm.  “Was it dead?” “Where is this? What did you do with it?” “Did you shoot it? Did it take a good beatin’? What happened!”

“Well hell I left that ol smelly thing alone, as I dont personally make a habit of approachin injured creatures twice my size.”

We nodded in agreement. I said he probably wouldn’t have come back to tell.  Ned said we should hunt down the creature and cut it open. I worried that this hideous creature had taken Aeg – and that it might not stop with him.

But Gutter continued the tale, and the mystery deepened even further:

“Come to think of it, it was askin me somethin under is breath about a flask of water real weak like.”

“But I dont trust the weak askins of a scary creature all alone in the seas like that.”

Still, I thought. It spoke. And it spoke our language. It was more than just a monster. And it might know things, might be able to tell us – if it survived.

We asked Gutter when this happened, and he said it was recent: “I reckon if the monsters that be aint made snacks of the bones yet, it might still be there.”

As for where, it wasn’t all too far away: “Hell if yall wanna go see a pile a bones and blood. I spose I could lead ya, but I aint doin it for that creature. Imma be lookin for scrap.”

So we prepared.  Some went to pick up their weapons – Gutter encouraged us to come armed, if just to defend ourselves against the other strange threats of the Sand Seas. I dashed to The N for empty moonshine jugs.  Malice, knowing very well the suffering of a Ghoul without water, took up a jug and ran for the swamps, returning a few minutes later drenched from the waist down, the jug brimfull and dripping. Ned brought out his rifle. Weapons and water in hand, we met up at the wreckage of the Trade Post.

Gutter gave us one last chance to see sense and turn around.  But there are few things so stubborn as Wastelanders on a mission – whether or not they’re sure of what that mission’s for.  The only one who stayed was the preacher, swaying in the sand-streaked wind, lost in rancid thought. Irk and Malice, Ned and I followed Gutter across the dunes.

We went south toward the spire, the massive tower of jagged brown stone that clawed at the sky like a greedy hand. Even Gutter seemed unsettled. In a dune on its west side, we rested, warily scanning the horizon.  Irk basked on the warmth of a rock. The Ghouls shared water from a flask. We talked of how we were prepared to die.  I spoke of how I expected to rise as a Ghoul, myself, if I did.  Malice promised to burn Irk’s body, should he fall.

We stood, and we walked onward, and we thought ourselves prepared for whatever we’d find. 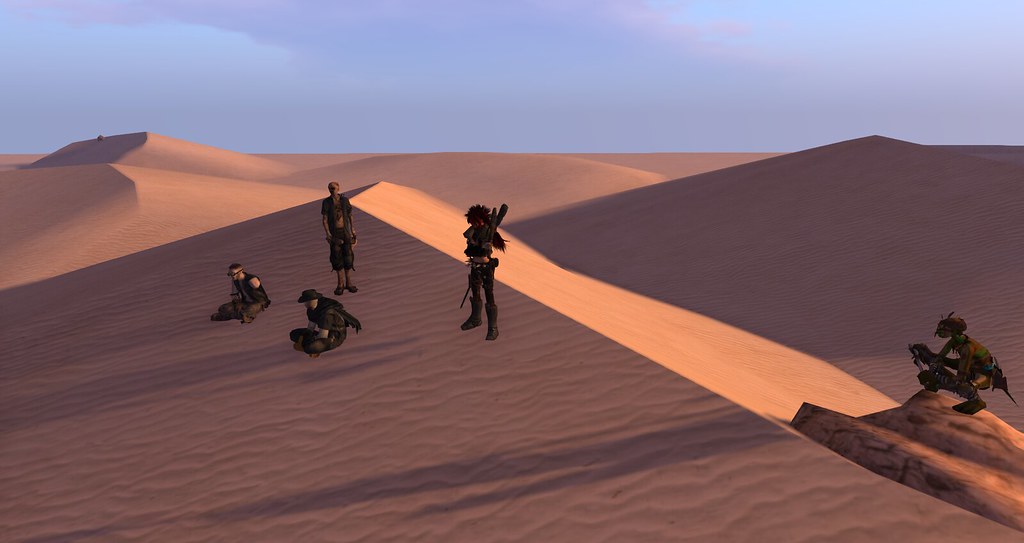