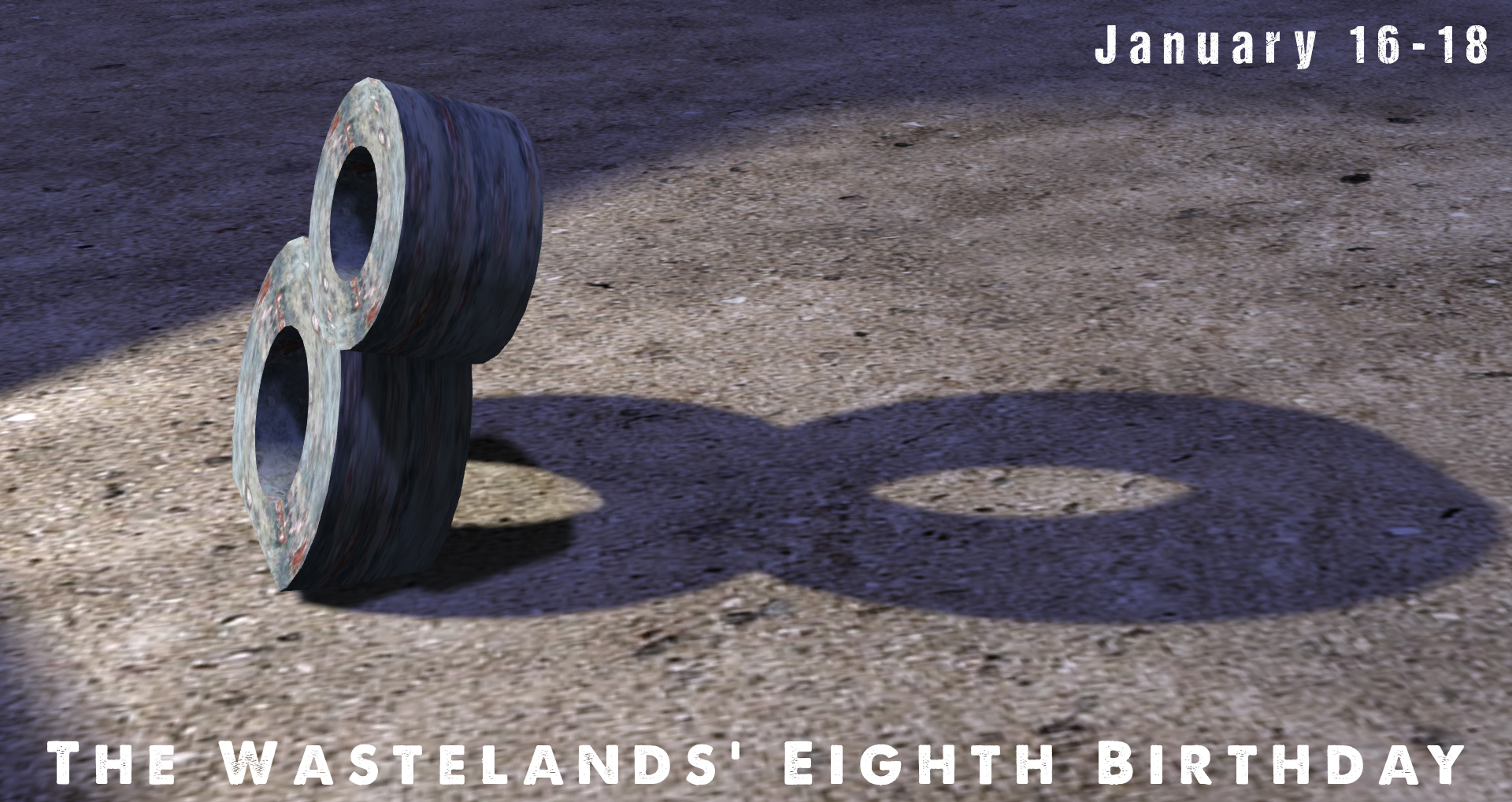 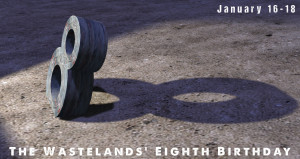 Today, for the first time in far too many moons, the air is filling up with the ticking of wordmachine keys, and a piece of paper is filling up with words.  To anyone who’d been missing these missives, I give all apologies.  This old wordmachine busted worse than I could fix. But, with the help of an alarmingly eager Masheener, all seems to be back in order, at long – very long – last.   Which is all well and good for the present and the days ahead, but it does nothing to salvage the time that’s passed.  So much has come and gone with the swell and sigh of the sands – more than I could ever sum up.  There’s only so much these words can do to pin time to paper, even when all’s at its best.  So, for all that’s gone unwritten, I give you my bone-deep regrets, bitter as the ash in this ink.

We Wastelanders are no strangers to all of that.  To the shift of the sands, to the fading of the memory, to the lament of the lost.  But, it’s like it’s often said: past is past, and now is now.  It is what it is.  And damned if we’re not going to scrap together the best godsbedamned thing we can out of whatever we’ve got at hand.  So here’s to now, and here’s to all that’s to come.

On January 17th, The Wastelands turned eight years old!  Wastelanders new and old celebrated with three jam-packed days of music, combat, games, and more.  For those who couldn’t attend – or who drank enough in commemoration that the memory is already hazy – a recap of each event in eight, count ’em, eight words:

DJ Masaka Miliandrovic – War!  What is it good for?  Absolutely nothin’.

Giu’s Movie Marathon – Surreal cinema, sunup to sundown (and then some!)

Avvy Barzane – Singing and strumming the classics, old and new.

Tremendous thanks to everyone who helped make WL8B – and every year of The Wastelands – so thoroughly amazing and wonderful.
Movie Night Haikus

Rude, stubborn GM
Feels attacked by Adulthood,
Tries to roll Will Save.

Before moving on to the Estate News, an extremely basic recap of major Estate events:

Over the past couple of years, some regions have moved, been renamed, and/or scaled down from Full Regions to Homesteads.  To summarize: Part of the Cape of Ruin was washed away in a storm surge that eroded much of the cliff face and swept away the ruins and builds. However, Kronbelt was moved east of the Junkyard and was renamed to the Cape of Ruin; this Homestead Cape functioned on the same Outland model of Hambone Slough and North Yard.   The Rot has moved to the former site of Ashvasta. Ashvasta itself was moved to the former site of Hambone Slash, where it was given Hambone’s old terraforming (with small adjustments,) received all the swampy textures and water pools once common to Malady Bog and Bloodmoss Swamp, and was finally given a new name: Hambone Slough.

The Game has also seen significant updates.  Most notable are the conversion to LL’s new Experience Tools system, which allows users to consent to an Experience once, and keep that status until the user opts out.  No more granting permissions for each game element every single session! Though the HUD is no longer an inventory object, players can still HUD up easily by camming to the Arcade Masheen in their region, then clicking on it.

A Wastelands Game Tutorial area has also been created, teaching new players the fundamentals of eating, healing, scavenging, crafting, fighting, and trading.  The Tutorial can be visited any time by clicking on the signpost planted next to each Arcade Masheen.

Though they are still somewhat uncommon, Turkey Buzzards can once again be found circling the skies – or skimming the sands – of Burnt Oak, Cormac, and The Rot.  Buzzards are a little more fierce than they once were, however, and put up a fairly aggressive fight.  But they’re also a little smarter than in days of old: when severely wounded, they may try to fly away and recover.  Killing a Turkey Buzzard has different, more randomized rewards now: while some may give up only a couple bits of tough birdhide leather, others may give up feathers, meat, or – rarely – more valuable scrap that the buzzard had clutched in its talons.

Those seeking a little more danger – in return for a little more reward –  can visit Alden at his post in The Heap to be assigned a (more or less) daily Quest!  Simply choose “Run Errand” from the dialogue box, and Alden will assign a random task: either retrieving a certain crate from a certain region and bringing it back to Alden, or harvesting a certain number of mushrooms in the swamps and bringing them to Doktor Aeg.  Some errands are more difficult than others, and although success is likely, it’s never guaranteed.  However, those who return their quest crate to Alden in time will receive one of a small variety of reward packages – often including such things as Medkits, valuable food, and Trader Scrit.  Those who bring Aeg his much-wanted mushrooms will receive some of the mushrooms he’s already preserved and prepared. There’s a cooldown period after each quest, whether you succeed or fail, but it can be “bought down” to a minimum of 12 hours by looting crates.

Food has also received a few tweaks: the dreaded 5% chance of a Poison DoT is no more, replaced by a throwing-up mechanic that instead depletes your hunger bar by some degree.  Some foods are now Bad Food, which are very likely to cause you to throw up and better used in other applications.  Other foods are simply regular Food, bearing some hance of vomit-inducing disgustingness, but some chance of energy-boosting Deliciousness. Crafted foods and other special foods are Good Food, which will never cause sickness.

In December, the Cape of Ruin Homestead returned to the region next to Cormac, where it has been re-terraformed with rolling dunes and low-lag, wind-responsive sand particles.  Those who remember earlier incarnations of Kronbelt may find an homage or two to what’s come before.  But this will be no typical Homestead or Outland region: according to Neo, “I am making it into it’s own set of parcels, but trying something [new] and experimental.”  This new format will hold eight small plots.  This reworking of the Cape – which will receive a new name when everything is finished – is Neo’s main priority for the time being.  Game development and other features are therefore on a temporary hiatus until the Cape is complete, unless an emergency fix is needed.
ROLEPLAY:

Things come and go in The Wastelands, but sometimes it seems like nothing gone is ever gone for good.  Sometimes that’s a comfort:  after many a span, that hardbitten trader and wanderer, Jubal Quintus, has returned to the Wastes – as has a new incarnation of the esteemed Trade Post.  There amid the detritus of the Junkyard, all are welcome to sell their weapons, foods, and wares, to sit down for a drink at Turp’s, or to ply their trade.  The tale of its rebuilding, and the community efforts that helped build it, is fit for its very own feature, to come in a later writing.

However, something less beloved has returned, as well:  that dreaded disease, Rustmouth, has once again begun to spread.  Called by some The Sick, or The Plaig, and perhaps known in other settlements as Sand Lung, its early symptoms are fairly mild: an itchy throat, dry or watery eyes, a heavy head, terrible headaches, lightheadedness, an unpleasant feeling in the lungs.  The sick find themselves unable to heal fully, never feeling their full energy – and it only gets worse over time.  Over the course of a moon or so, the lungs begin to feel like sacks of knives, the body is wracked by fevers and chills, and one coughs up the mouthfuls of blood that give the disease its name.  If left untreated, it’s surely fatal.

There’s no need to flee the Wastelands in fear, though: there is a Cure, thanks to Doktor Aeg. It may be an unpalatable acrid brown paste, but it’s guaranteed to stop the progress of the disease, allowing you to return to full health and vigor.  The sick are encouraged to choke down a full flask of the Cure as soon as they can, whether by making it, trading for it, or – if necessary – buying it. Given the danger Rustmouth poses to the public, Wastelanders are likely to help the afflicted by offering a fair trade for cure components, or full doses of Cure.  They’re also liable to take a violent dislike to those who try to spread the plaig on purpose.

Though folk have tried all manner of methods to prevent catching the sick – covering their mouths with masks or carrying certain charms, killing Buzzards or staying far away from Buzzards, avoiding Tusk meat or other certain foods, bargaining with spirits or performing sacrifices – there’s only one sure way to avoid taking ill: keep away from the sick.  The disease only seems to pass from person to person, and only when in very close quarters.  Keep a distance from the known sick – and from strangers – and it seems one should be spared.

For the sick who fear infecting their clanmates or those they take shelter near, The N Keeper, Aposiopesis Fullstop, is in the process of rebuilding the Rustmouth Shelter.  The N itself also has information on Cure-making, whether you’re infected and want to make your own Cure, you’re uninfected and wanting to take precautions for yourself, or you’re wanting to help spread the Cure to those in need.  The Cure-making posters are all pictorial, in hopes of helping even those who don’t know their letters, or are from forn parts.

The Mutant Witch ((Ccindy Pfeffer)) is also offering the Cure in exchange for help with jobs she’d rather not do herself –  and she’s hinted at a gardening project.  She may be known for her sharp tongue – and sharp teeth – but those who  should seek her out at the Grotesks’ new headquarters, Rusting Buzzards, on the west side of the Stygian caldera.