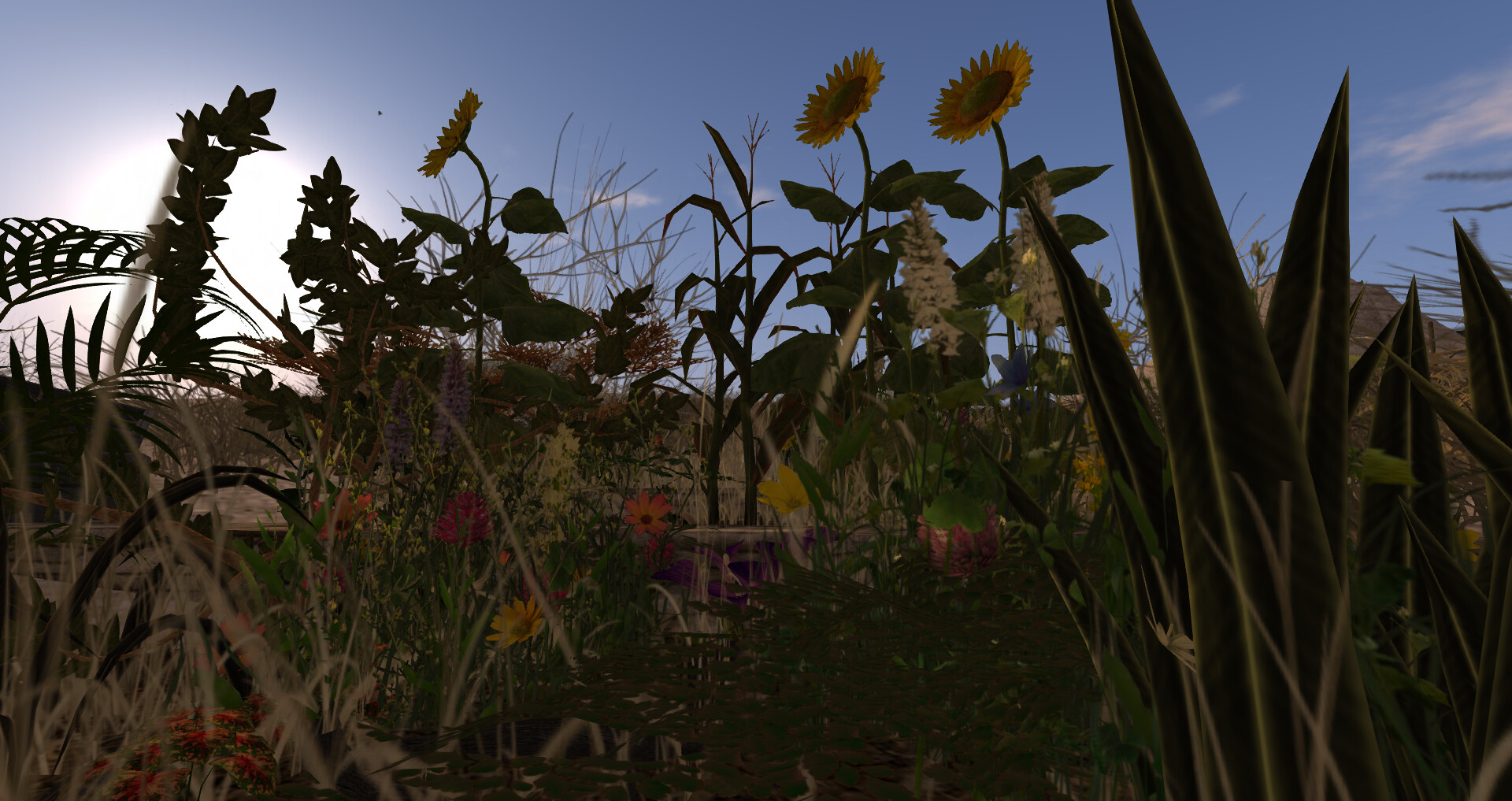 Faith In Ruins is a new series of in-character interviews which delve into the roleplayed religions, cults, spiritual practices, and belief systems of The Wastelands. Characters who portray spiritual leaders and practitioners describe the tenets and traditions of their faith in their own words – words which preserve and share the cultural concepts they’ve created, and which potentially inspire new adherents or adversaries.

In this first series, we explore the Mutant Ways, aka the Old Ways, as practiced by The Mutant Witch of the Wastes, played by Ccindy Pfeffer.

Chat logs have been edited for content and clarity, by mutual approval.

Aposiopesis Fullstop approaches, her presence indicated well in advance by a series of uneven footsteps and a crescendo of grumbling.

Aposiopesis Fullstop hoists a jug in the air. “Damned crate tried t’ blow up me leg – but I din’t lose yer hooch, Witch.”

The Mutant Witch of the Wastes raises her head slightly and listens noticeably, then quickly puts something into a pouch and puts it to her belt before Apo can get a look at it. Only then does she turn her head to look for her. “Yous be happy it not shred yous greedy little fingers when break it open.” She grins. “Yous be survive this night, or me need prepare the rites?”

Aposiopesis Fullstop snorts as she limps in and lowers herself onto the bench on the other side of the fire. “We Humans ain’t THAT squishy.”

Aposiopesis Fullstop sets the black jug on the bench next to herself.

The Mutant Witch of the Wastes’ trained eyes stay on the limb and movement, judging the amount of blood and number of cuts in the cloth. A little hesitant, she starts to rummage through her pouches and takes out a yellowish fatty looking lump and splits it in half with both thumbs. She leans forward and holds one piece on her palm to offer it to Apo. “That be help. Make it melt over fuel can and than rub it to burned skin,” she mumbles, then eyes the jug for a long moment. “That say we be done yes?”

Aposiopesis Fullstop blinks a few times, then accepts the strange wad. “I’ll do that, aye. No meltin’ this one inna cup an’ drinkin’ it, eh?” she says with a small laugh as she delves into a pouch and extracts a tiny glass jar with a rusted lid.

Aposiopesis Fullstop deposits the lump in the jar and nods. “An’ aye, reckon this is the last tradin’ o’ words you’ll gotta do. I’ve ask’t near to all I set out to ask, though I’m sure there’s plenty I ain’t thought of, an’ more ye’d not tell an’way.”

The Mutant Witch of the Wastes raises a non-existent eyebrow. “Yous not just stick all things in yous mouth. But me tell yous again, put glass in yous mouth be bad too. Just make sure yous know.” She rolls her eyes and sighs. “OK, last time questioning,” she agrees and reaches over to take the jug, slowly wiggling the cork out while she listens.

Aposiopesis Fullstop: “Most o’ these questions been on how them beliefs… work, ye could say. What they are, what ye do, what ye should an’ shouldn’t do, all that. But fer the last, I’m innerested in… tryna sum what it means, an’ the good it does. To yer people. To yerself. Now,” she says, holding up a hand, “I gathered thass a bit much, an’ also… pretty simple. ‘Tis the true truth, an’ thass all it need be, but…”

Aposiopesis Fullstop looks around. “Ain’t as if ever’body sees nor acts as if they’re truth. So, if ye had t’ sum up… how do these Ways help somebody get by in th’ world? Somebody in gen’ral, or you in sp’ific?”

The Mutant Witch of the Wastes narrows her eyes. “What good it be? Yous not be listen very much. It not be good knowing that you kij be stand with yous in hard times? It not be good know that there be no fear in death when yous know birth follows death ever and ever? It not good understand why yous be how yous be, me be like me be, and everyone else be like these be, why sand be how sand be, why water be like water be? Yous see no good in these things?”

Aposiopesis Fullstop chuckles a bit. “Nah, I ain’t askin’ that because I ain’t been listenin’ afore. ‘Tis more about… tryna gather it all t’gether, say it short. Not just ’cause folk are too impatient to lissen an’ learn, but… hm.”

“Ye know how, if yer gon’ go elsewhere a while, ye might pack up some o’ the things ye need most in a wee bag? They ain’t enough to survive a span, nor e’en a moon, but it’ll get ye through a few days’ travel? My askin’ is like that: fer the folk who’ve just come in from the Nothing, who mebbe ain’t remember themselfs, whose minds are yet wanderin’… to give ’em a sort o’ pack o’ the ideas. Enough that can tide ’em until they get to where they remember again, or can learn more anew.. But ’tis best fer folk to hear it in YOUR words, not mine.”

Aposiopesis Fullstop: “Also… well, I’m sure there’s folk who DON’T see the good in them things right away. Mebbe they ain’t got close clan, they do fear their death, they ain’t care why an’ how people an’ things be as they be – they’re just tryna keep alive. I know ye live in these Ways all th’ time – but can ye tell o’ some sp’ific times when followin’ these Ways has help’t guide ye through difficulties?”

The Mutant Witch of the Wastes gets the cork out and smells on the jug wile she ponders about the question. “That be like first jug was yes?” She takes a sip and plays with it in her mouth just to spit it out again into the fire, watching the flames bellow up a little. “What be good about knowing how all things be? That not be easy, but me can tell yous why it be better than not know how all things be.”

“In long night, all things make scary shadows, haunt yous, make yous fear what yous not see. But light fire and shadows go, yous raiders in darkness be only grass and tree. Like Smoothskins tame the pain in the wire, make it light the shed and run the water, but Manimal fear pain in wire cause it no understands where hurt come from and how tame it. Same be with Mutants and understanding of spirit world, and spirit colors, and how all things start, how these end, and how things start again.”

Aposiopesis Fullstop smiles a bit and nods, scrawling some notes in her book.

The Mutant Witch of the Wastes: “Yous not understand difference between kij and just someone yous share yous camp with. Yous fear for there be knife waiting for yous when yous sleep. Yous always be one eye front and one eye back, yous always be all things tribe needs, but only one. Me know where me be safe, who endure for me and who me endure for. Me know me endure what me suffers less than others, and hunter endures what hunter suffers less than others, and eldest endure what eldest suffer less than others. Me know me not be all things at one time, me can be witch, and there be others that feed me and others that lead me and others that do all things me suffer more than these. That be true meaning of Tribe.”

Aposiopesis Fullstop sighs a bit. “…Aye, Humans ain’t grand at that, atimes. If ye suffer sommin’ more’n others, well, ye best bluff about it, ’cause there’s plenty who’d take vantage. …Still, I reckon there been times it seemed yer faith weren’t enough, when it was tested?”

The Mutant Witch of the Wastes’ lips narrow and her eyes wander south. Her lower jaw slowly mills from left to right. “Me know me rotten brother be lost from Big Cycle. It spirit color already be twisted and its spirit be torn and in shreds. Yous all be selfish and want it be lost for ever, just for few more seasons. Me wants to help it, me really want. Me took Sins on meself no witch ever be take from me. Maybe sandspirits be see it be in good intend, but if not, me be no longer kij to me people after rebirth, or me never rebirth again. And still me brother be lost, all for nothing.”

Aposiopesis Fullstop looks down at her page. “…Aye, can see how that’d all be… easier t’ deal with if ye just let go the Ways, or that partic’lar bit of ’em…. but… I mean, as a Witch can trade w’ the spirit o’ a Bird Dragon when hunters actually killed the last one… an’ as ye ain’t actually kill’t Doktor Aeg, though wantin’ to is a Sin to its own… yer Ways don’t give a Witch any ways t’ trade away that Sin?”

The Mutant Witch of the Wastes: “There be sins spirits will not trade for,” she explains very briefly, and more breathing it out than actually saying it. “Just kill be no Sin, last kill be. But killing kij… no spirit trade it. Me hold stone, me wove curses and the witchcraft. Sin be made, be sure it be. Me color be tainted and only sandspirits be answer what happen to me spirit when me die.”

The Mutant Witch of the Wastes holds out the jug to the side, away from the fire, and turns it upside down, letting the booze run out unhindered and splosh into the sand next to the bench.

Aposiopesis Fullstop blinks. “Oi now! That ain’t look like no witchcraft t’me!” she says, affronted. “…Though it prolly IS,” she says, sounding equally annoyed with her own confusion.

Aposiopesis Fullstop accepts it, looking back and forth between the Witch and the damp sand, her brow furrowed in bafflement. “…Whass that all ’bout?! We square in that deal or not?”

The Mutant Witch of the Wastes: “Me no need it. But me need make sure yous value these questions yous ask. Me not wanted answer these with yous think these be free and these be of no value. But me also want yous know that.”

Aposiopesis Fullstop grumbles. “I put more value on them words than on that hooch an’ day. …But I hope there been sommin’ in it fer you, then, worth moren’ just two – ONE – jug o’ hooch. ….I cain’t tell ye if’n it’ll do good to others. If any’ll hear or read an’ come up lookin’ to learn the Ways an’ follow. But… well. It’d prolly be a fine thing fer the both of us if’n someone did.”

The Mutant Witch of the Wastes nods understandingly. “There be things only time can show. Do yous understand now why yous ask me tell yous these things? Wanting to know before yous knew what there be to know?”

Aposiopesis Fullstop rises from the bench, wincing slightly as her wounded leg takes the weight. She nods as well. “An’ already wantin’ to pass them knowin’s on to others – also afore I knew what there was t’know.”

Aposiopesis Fullstop: “Fer now, best we get to the Bazaar. I reckon I got words t’ trade. An’ you got folk t’ keep from fallin’ out the Big Cycle one way or t’other,” she suggests, smiling. “Be seein’ ye there!”